“I have all that protective stuff, but I really hate to wear it,” Rob Keller said as he gently lifted the lid of a hive to peer inside at its 20,000 or so occupants. I took a step back.

“Gorgeous, drop-dead honey,” he murmured in that distracted way of talking that people have when they are staring at treasure. Mr. Keller manages hives for 30 private clients, including local wineries, restaurants, and investment bankers turned gentlemen farmers in the vicinity of California’s Napa Valley. Tagging along as he made his rounds one recent afternoon, I realized this is a man who sees a lot of treasure.

As he poked a hive with a scraper thing, a dozen bees circled his bare, unveiled head–and two landed, unnoticed by Mr. Keller, on his t-shirt. “Here, taste this,” he said, offering a wedge of honeycomb. I inched forward, half a step, to prove I am not a baby. The honey tasted like flowers, like sunshine, like–

“Ow,” said Marla, the photographer. Stung. In the scalp. But she still got the close up: 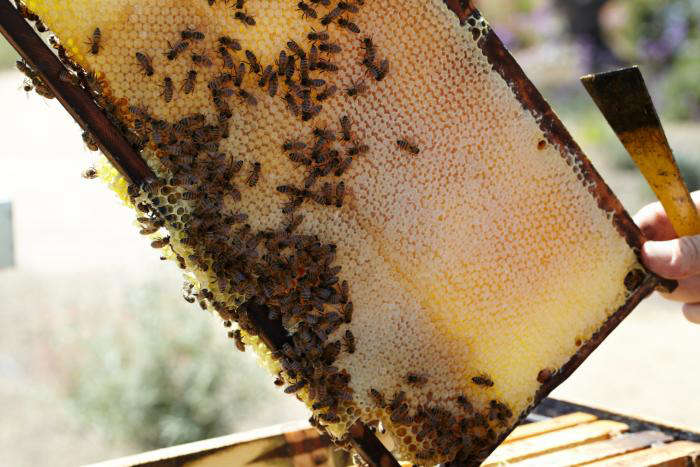 Above: After he opened the hive at Ram’s Gate Winery, Mr. Keller found evidence of a healthy population: one queen, drones (males whose only job is to mate with her), the brood (bee babies), and foragers (who collect pollen and nectar and propolis, a sap-like substance from trees used to build hives). At the height of summer, a colony might have a population of 20,000 bees. 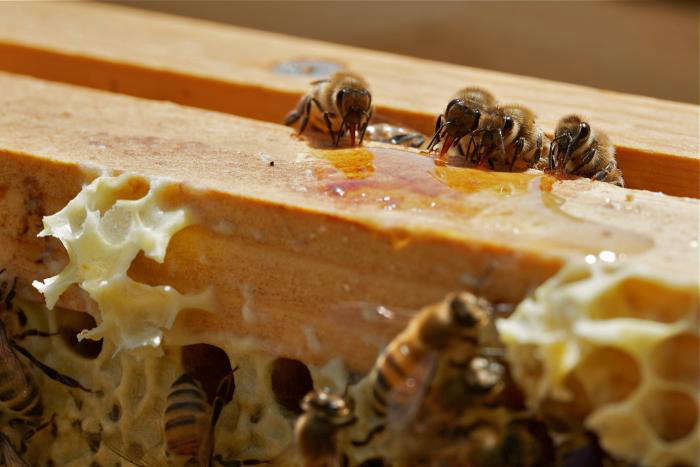 Above: “Don’t expect honey–do it because you love bees and think bees come first,” Mr. Keller, the founder of Napa Valley Bee Company, tells students who enroll in his beekeeping classes at Diablo Valley College. For would-be beekeepers, his advice is: read books about bees, tag along to watch an expert, take a hands-on class, and then after a year or so of serious contemplation (if you’re still interested) buy protective gear, purchase a hive, and get some bees. A starter colony costs about $200. 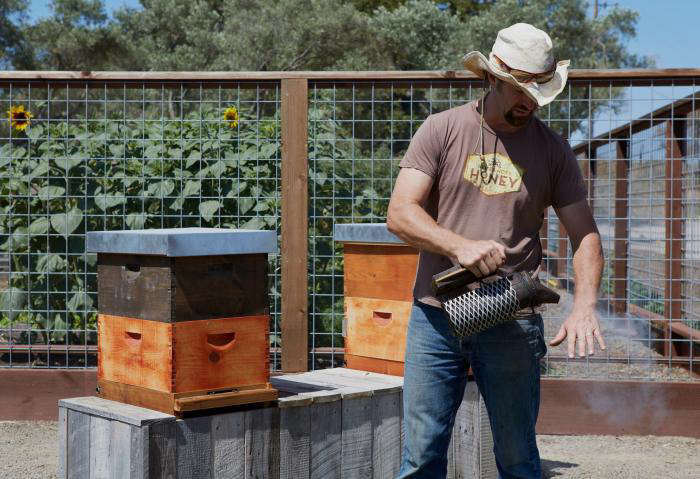 Above: Mr. Keller uses a handheld smoker to mask his scent before handling bees: “They see me as less of a threat because I smell like smoke.” 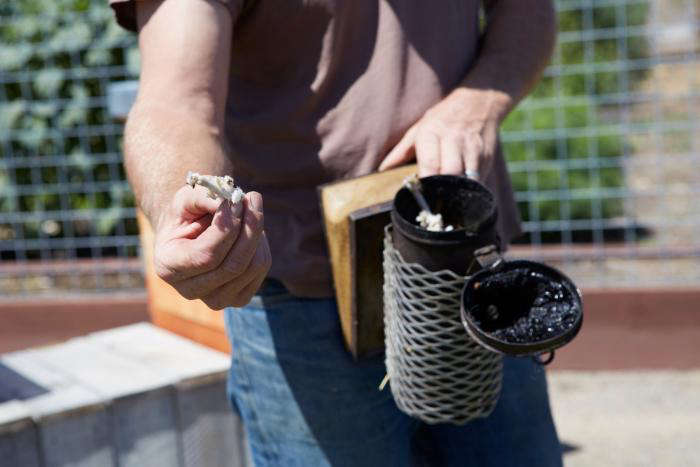 Above: In his smoker, Mr. Keller burns twigs and dried up bits of plants such as lamb’s ear. “I tie it up into little bundles,” he said. 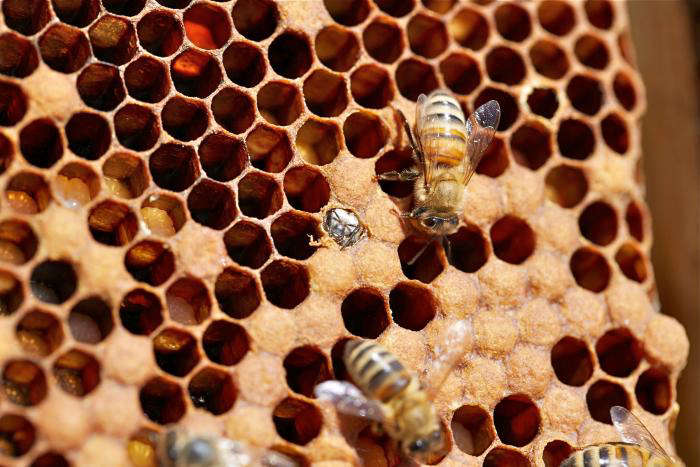 Above: Evidence of a healthy colony: new baby bees emerging from the same hexagonal wax honeycomb cells in which bees store honey. 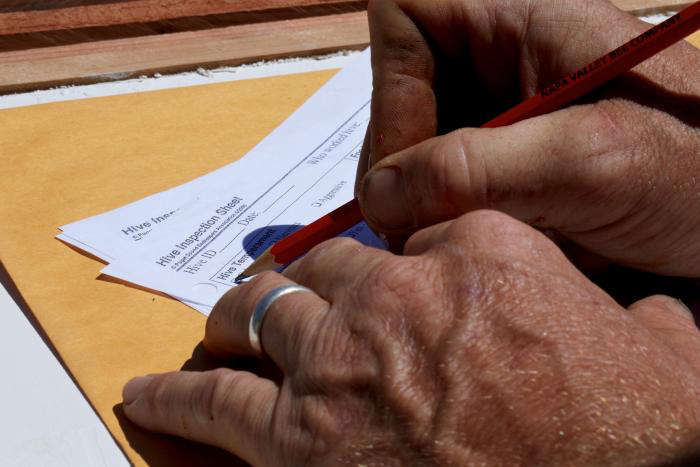 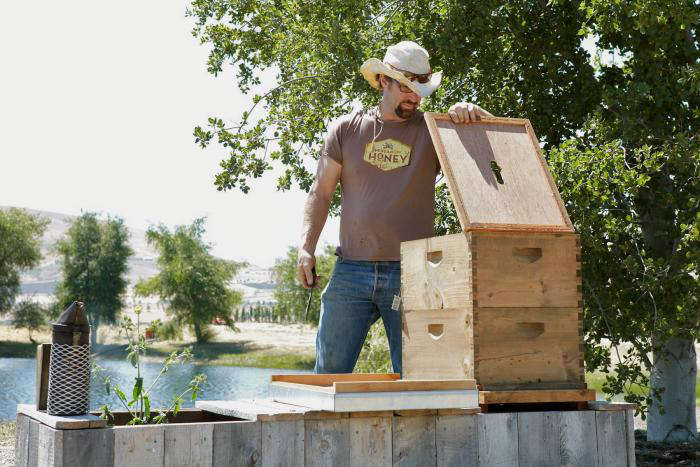 Above: Next stop: a colony that’s not thriving. Mr. Keller is on the lookout for evidence of Deformed Wing Virus, one of 18 known viruses that threaten Apis mellifera honey bees worldwide. 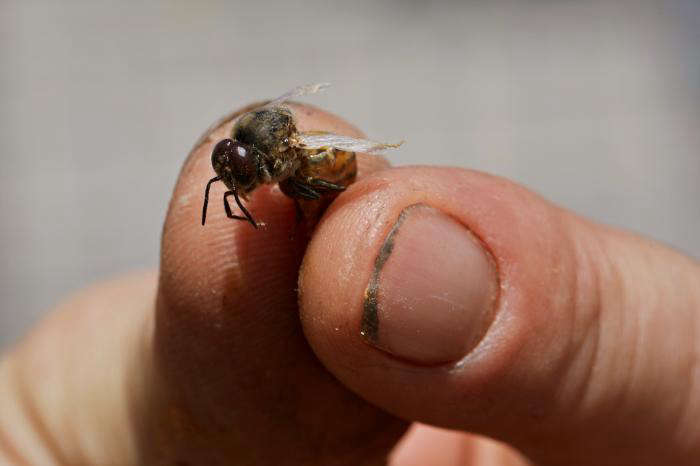 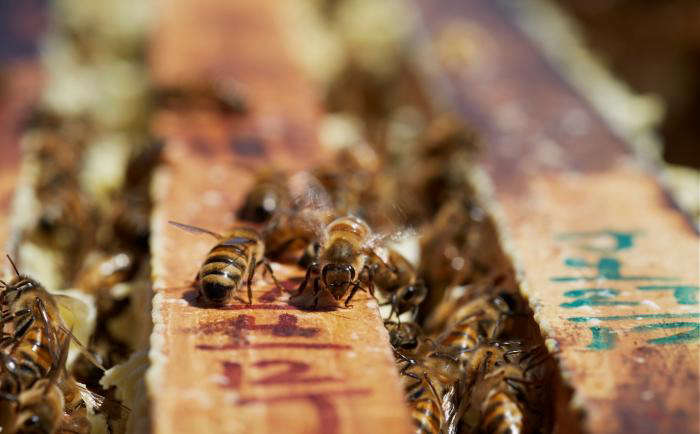 Above: Mr. Keller does not believe in medicating bees because “if you treat them, you’re potentially fostering compromised stock,” he said. He gets the best results from raising local bees–in this case, stock that’s genetically acclimated to Napa Valley’s weather and other local conditions. 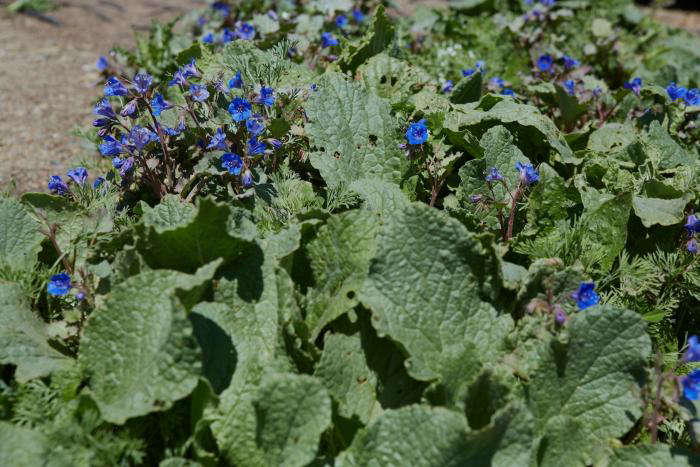 Above: Planted around the hives’ perimeter is a wildflower mix that bees consider delectable: borage, poppies, and alyssum. “I want to give them something in the immediate vicinity to lure them back to the hive,” he said. 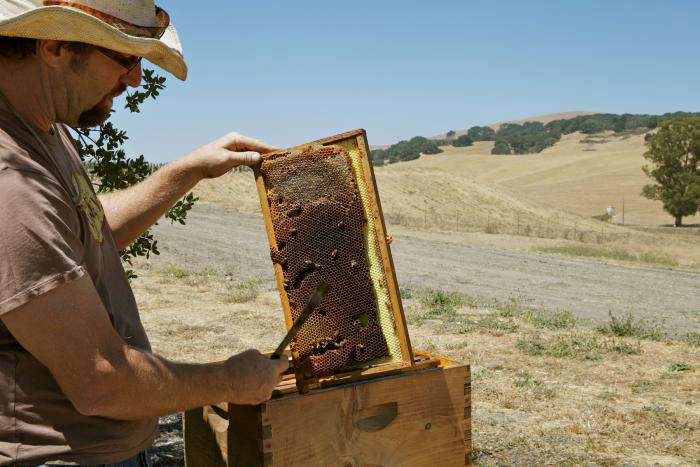 Above: “Not much going on in this hive,” he said. “Raising bees is not like raising livestock. With a flock of chickens, if you’re not doing it right, you don’t affect anyone around you, but with bees, it’s open mating. You can spread bad pathogens if you’re not careful; the virus can go from hive to hive to hive.” 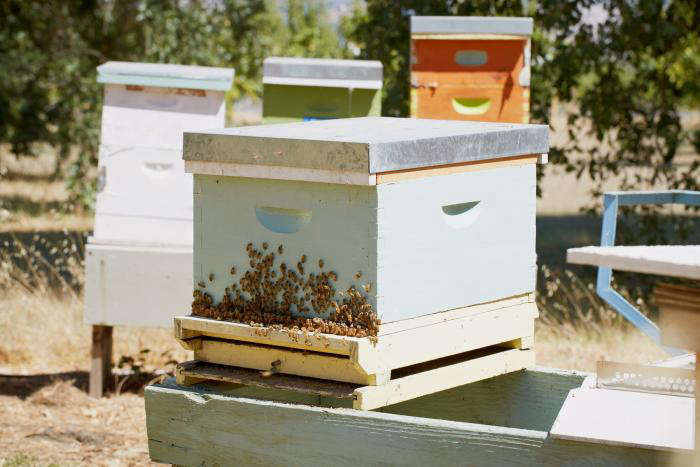 Above: When a colony outgrows its hive, you need to add another layer of frames and boards for bees to build more honeycombs, or you need to split the colony–or else they’re going to swarm. To split a colony, you need to create a second queen. Here’s how:

“First, take away the queen,” Mr. Keller said. “Three days later, they’ll be ready to rear another. Cut out a section of comb that contains eggs of the right age and turn it upside down and attach it between two frames so it doesn’t fall. They’ll raise a queen from one of the fertilized eggs that’s the right age.” 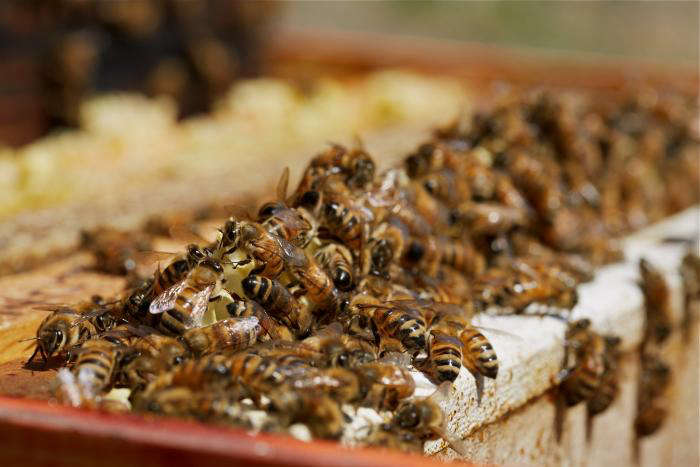 Above: Mr. Keller keeps a supply of Benadryl in his van. (He gave some to Marla for her scalp.) Some days he doesn’t get stung. Other days, a few dozen stings. “It hurts,” he said, shrugging. “Some days, you know it’s going be a big day if you get stung before 7 am.” 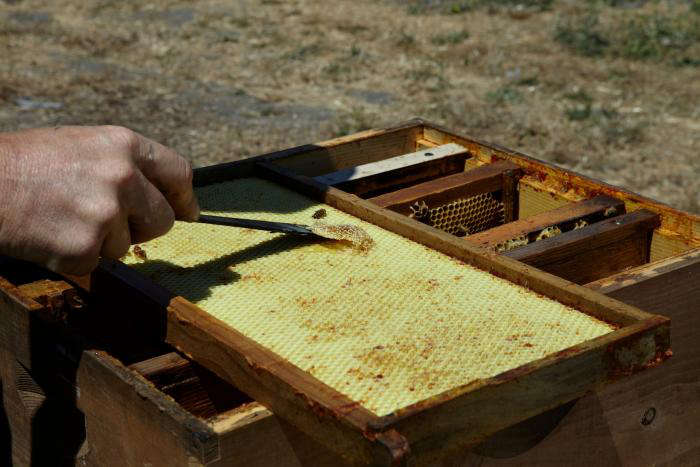 Above: A single fully-built-out panel of honey-laden wax comb can weigh as much as eight pounds. 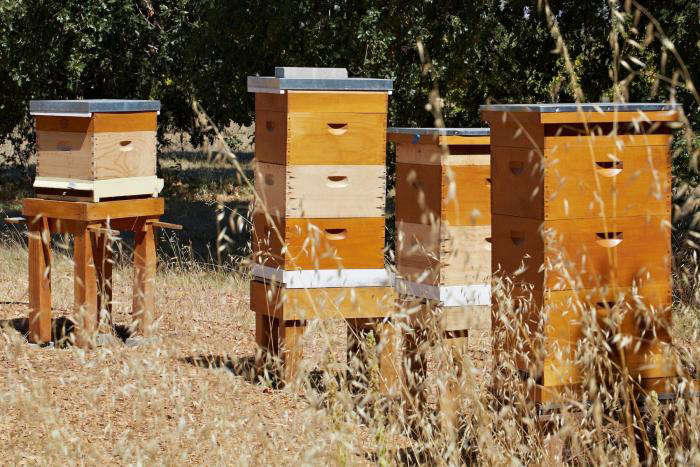 Above: Mr. Keller uses custom-built hives with metal covers to give bees a break from the hot midday sun in Napa. 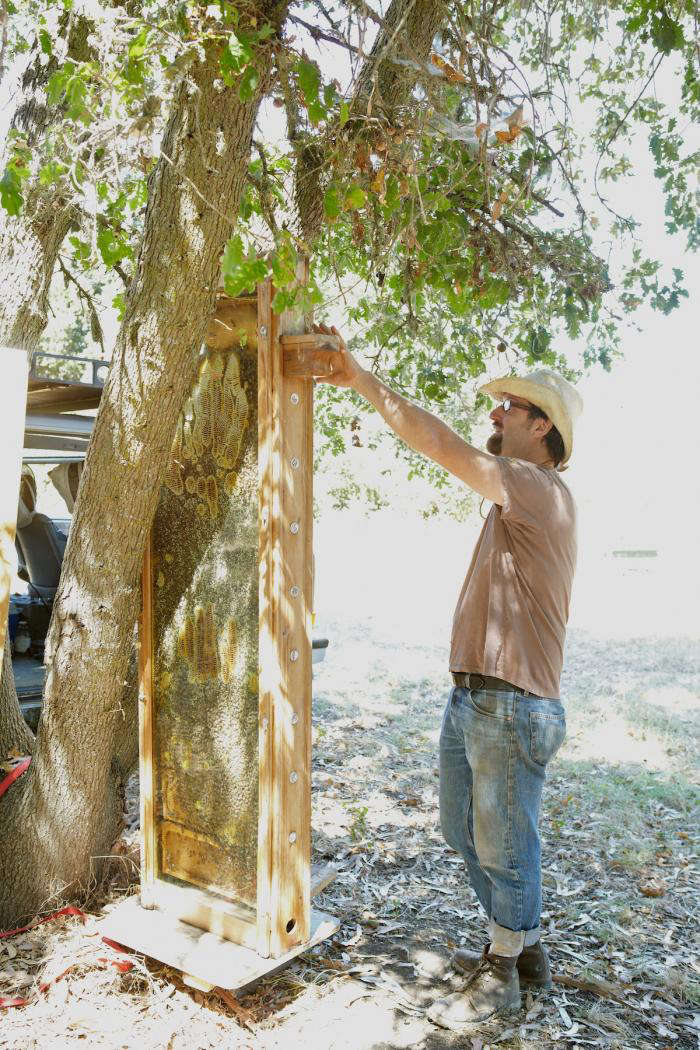 Above: Mr. Keller got a grant from the Creative Work Fund to build a huge mobile beehive –the world’s largest mobile bee observatory–that he transports in a converted Airstream to fairs and educational events. 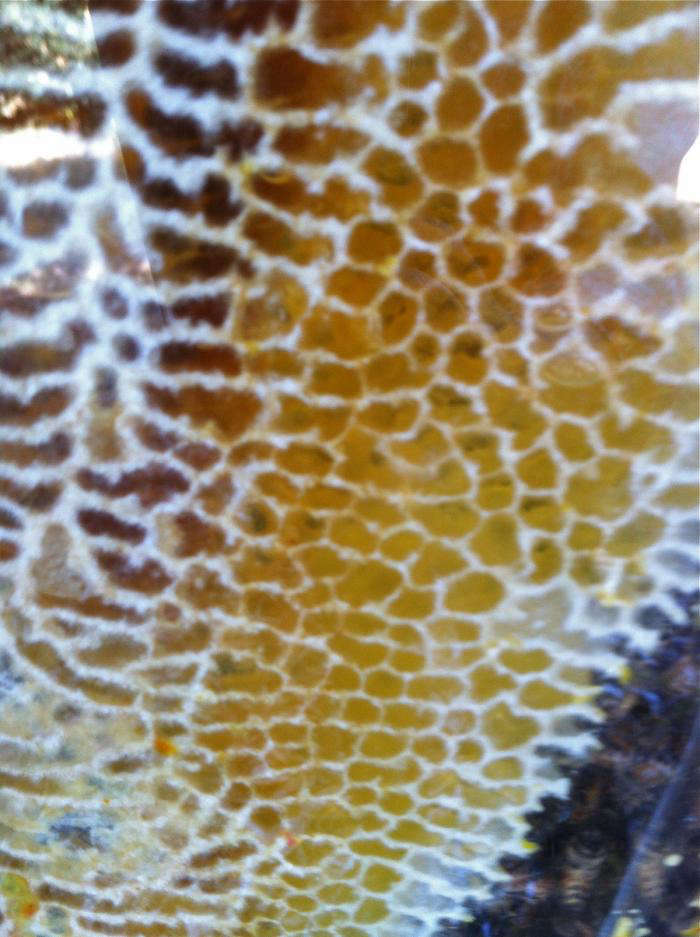 Above: A close-up look at the structure of the honeycomb patterns in the world’s largest mobile bee observatory, which houses 60,000 bees and weighs 400 pounds–much of it honey.

For more about Rob Keller’s exploits, see “The Buzz: Beekeeping in Napa.”

The Ultimate Open-Air Dinner Party: A Floating Pallet Under the Stars