When creating logos for local cafes and beer-brewers and letterpress invitations for weddings, husband and wife team Chris and Elizabeth Boyette draw on their love for “all things of old, things with history and a story, sometimes slightly beat up but always well-loved.” So it’s no surprise that, when searching for a creative space for their Raleigh, North Carolina-based graphic design business, Good South, the couple saw potential in a rundown and historic Southern building: a tiny railroad shed. Here’s a look at the process.

All photography by Chris and Elizabeth Boyette, except where noted. 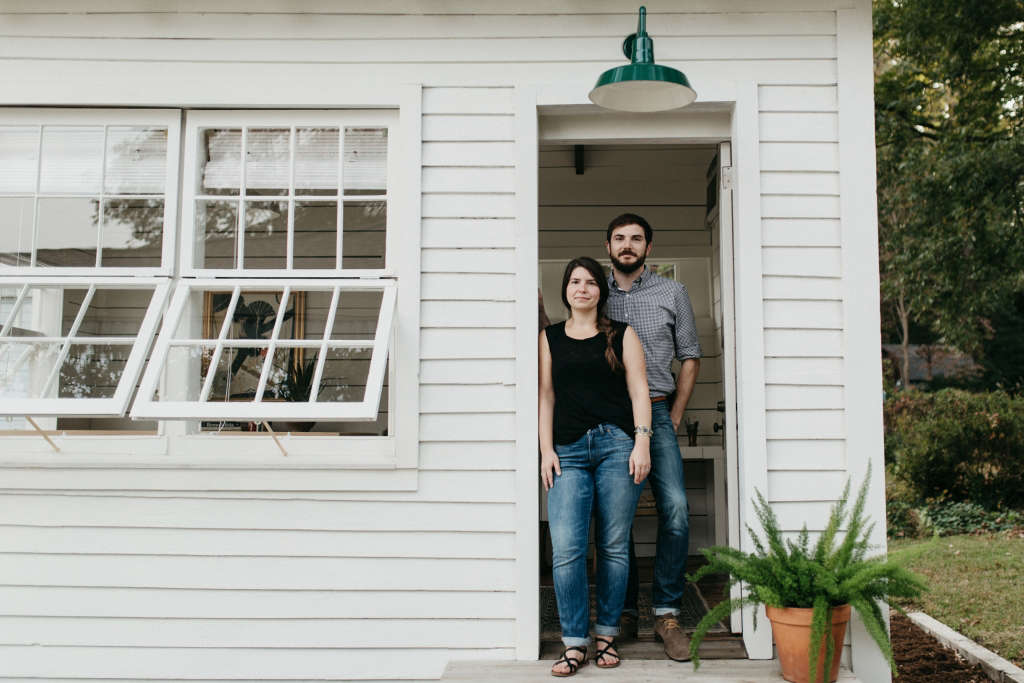 Above: Chris and Elizabeth outside their new studio. The couple sourced a green Multi-Mount Warehouse Barn Light from Northern Tool ($114).  Photograph by Brett & Jessica Photography. 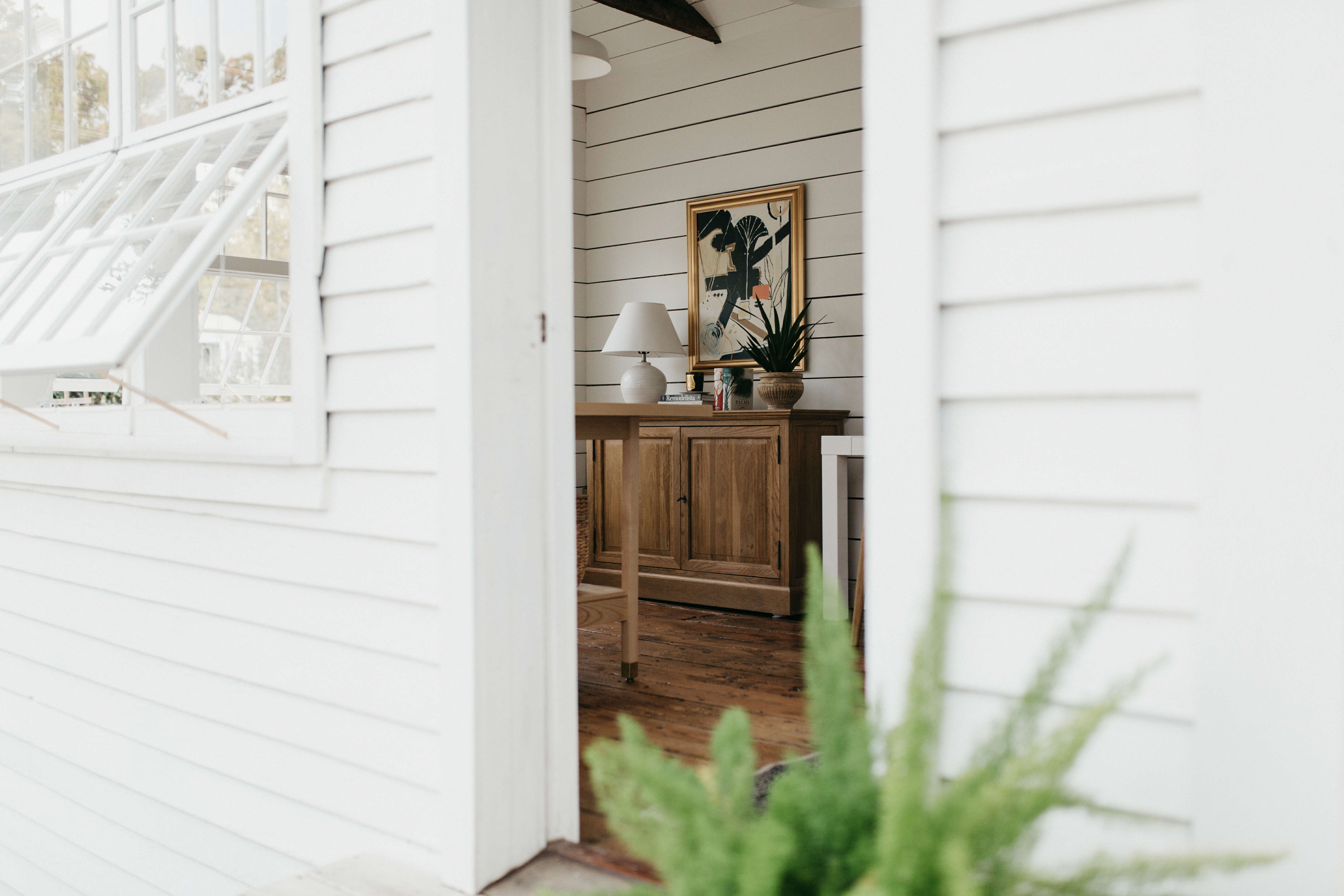 Above: A peek inside the studio reveals the couple’s vision of “freshening things up and giving the old historic building a modern touch.” Photograph by Brett & Jessica Photography. 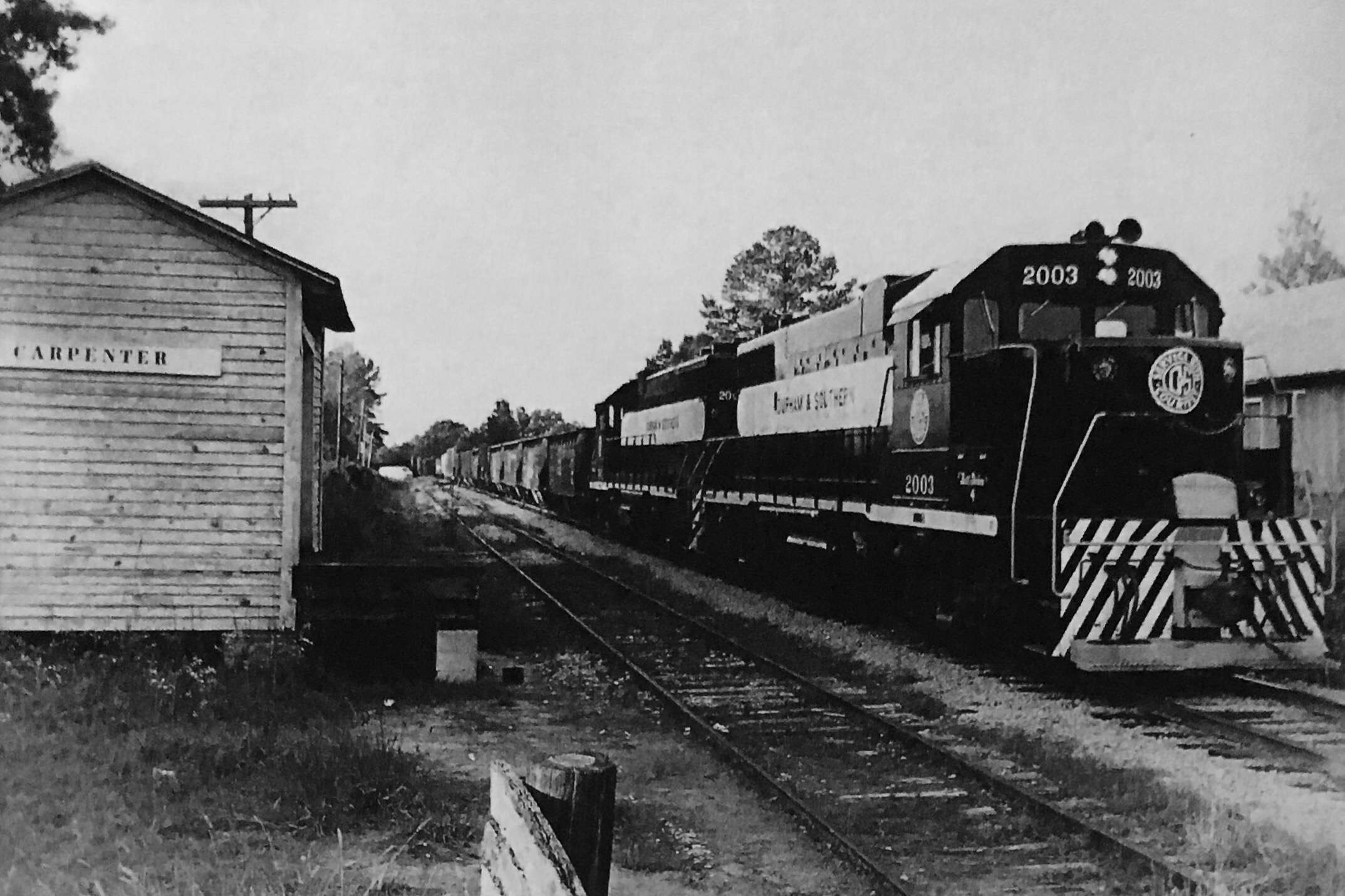 Above: The building has a long history. “The building originally resided along a stretch of railroad tracks in the small community of Carpenter, North Carolina,” Chris says. “It housed tools and equipment for railroad maintenance and even had a working telephone inside.” When the use of mills in the region diminished, the original rail depot was deconstructed and the timber was used to build a smaller shed (shown above with a sign that says “‘Carpenter”).

“The building dates back to the early 1900s and is still known today, in the Carpenter community, as the ‘Little Depot,'” Chris says. Photograph courtesy of Dale Diacont. 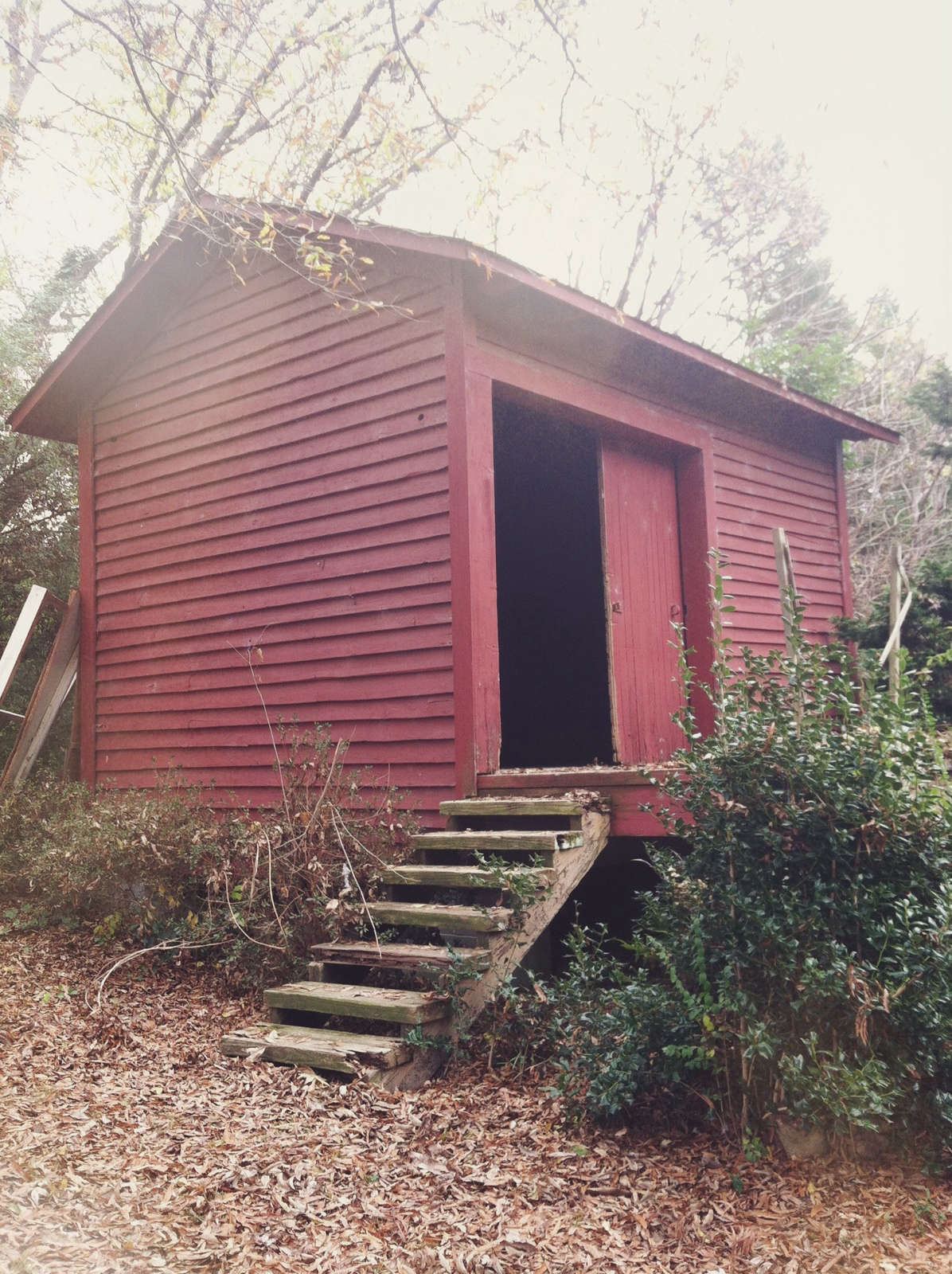 Above: “The former owner of the building had it moved to his property to save it from demolition,” Chris says, but the shed had fallen into disrepair. But the couple knew the shed could be a perfect home for their business. Chris says, “My parents were at an estate action and called us to tell us it was for sale. We rushed there to take a look at it. and knew it was something we could renovate into a space that worked for us (and would cost much less than building a new structure from the ground up).” 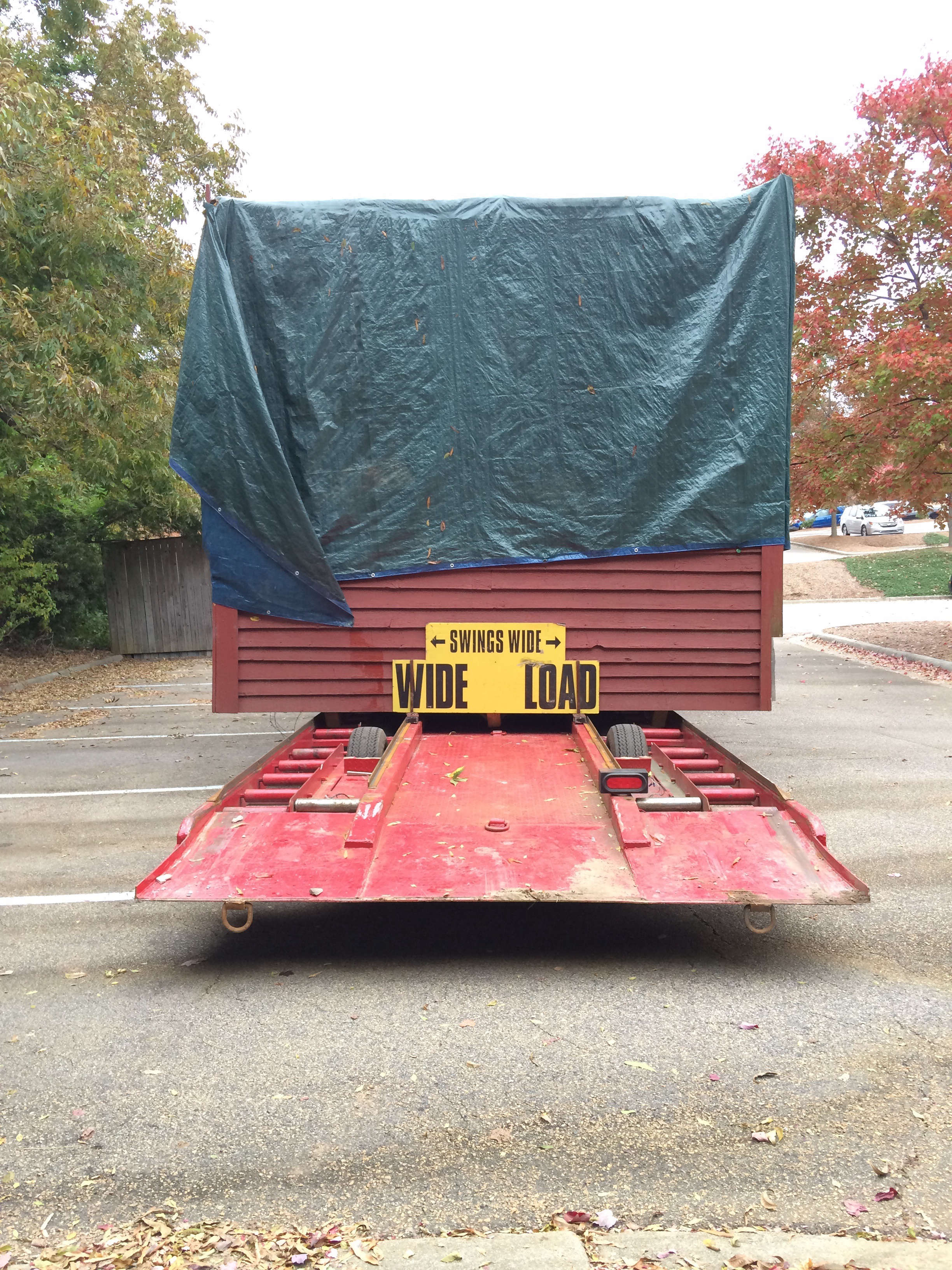 Above: With its rickety stairs removed, the shed was loaded onto a flatbed truck and moved to the Boyettes’ backyard. 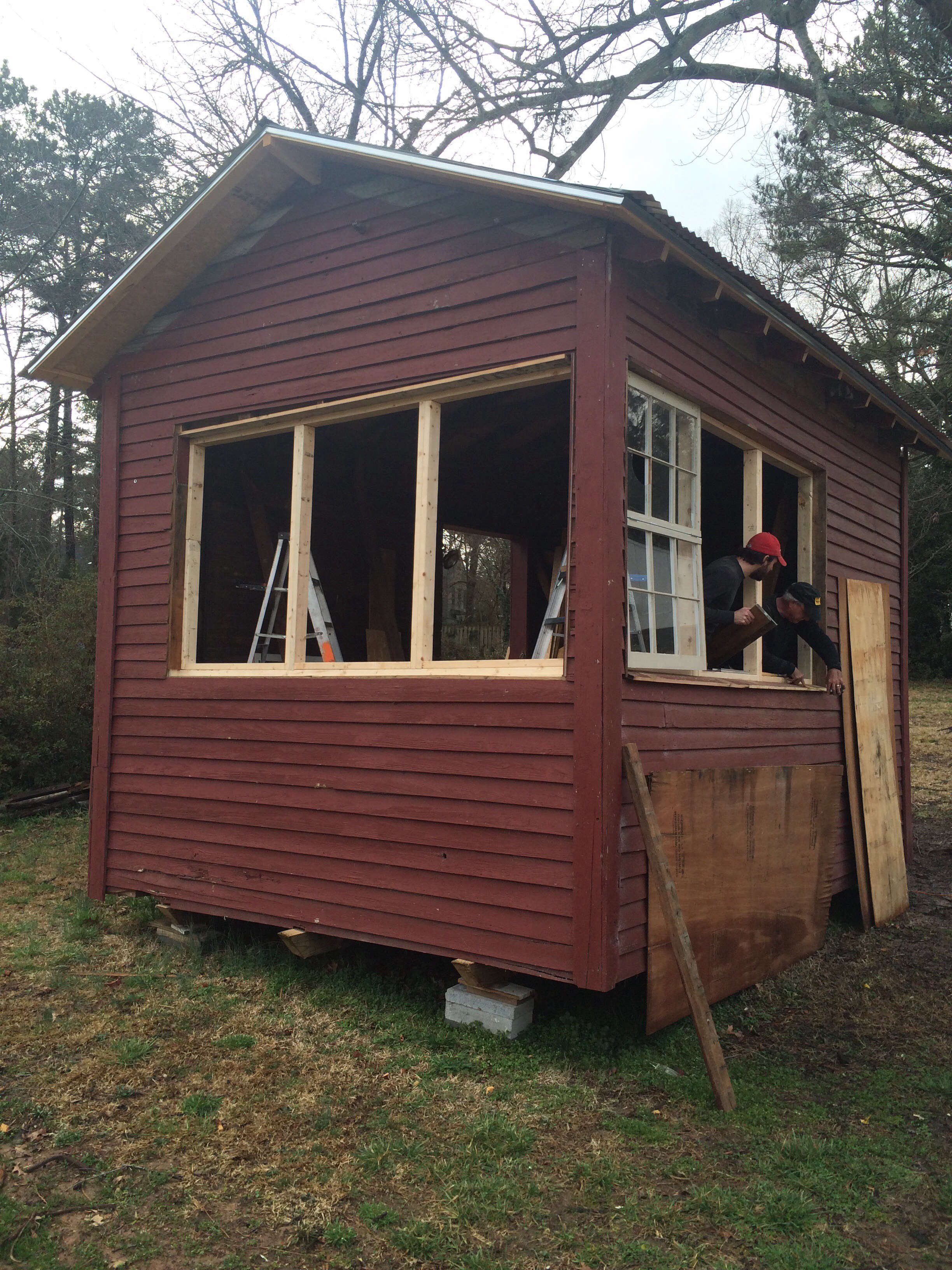 Above: “We wanted to make sure that we kept as much of the original materials as possible,” Chris says. But one major change was necessary: “The original building didn’t have any windows, only a large sliding door on one side. We wanted to bring in as much natural light as possible.” With a local architect and friend, Jacob Burke, and Chris’ father, they brought the building down to the rafters and made space for more light. 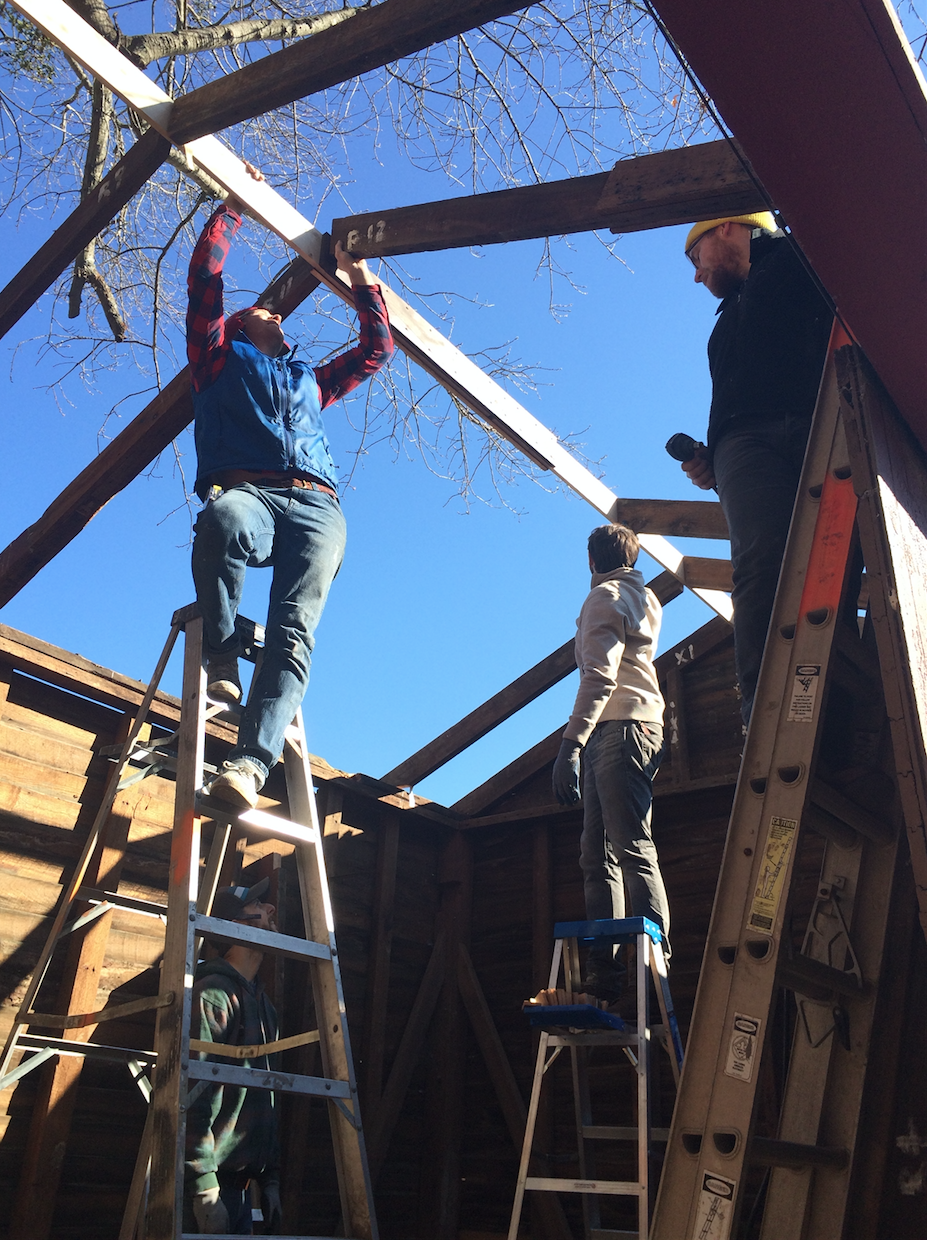 Above: The couple had to dismantle the roof before moving the building. But a 2016 approach to architecture offered an update to the early-1900s ceiling: “There were originally seven or eight joists, and our architect found a way to rebuild the roof with only three, to make the vaulted ceiling more open and spatial,” Chris says. 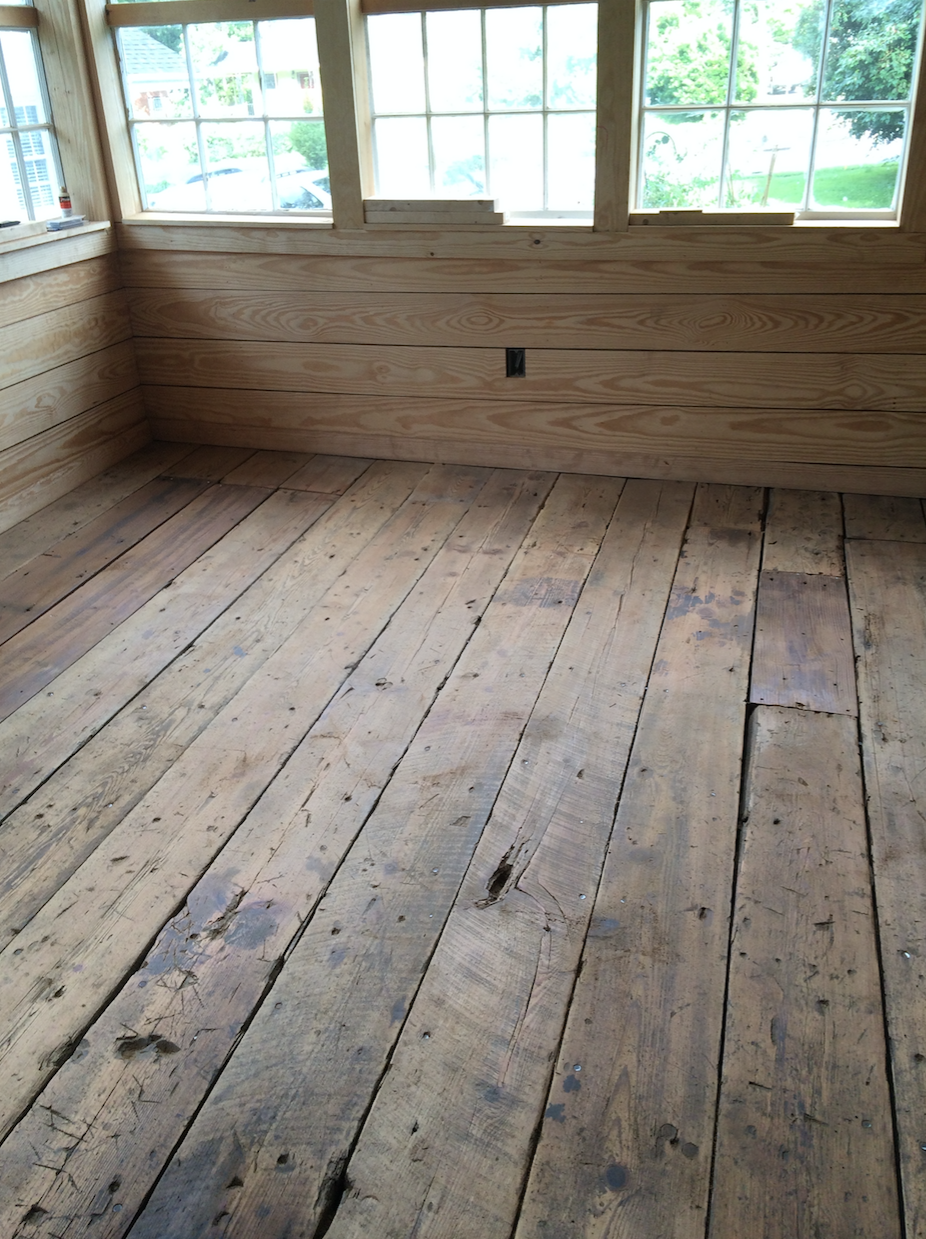 Above: The rough-hewn, wide-plank floors are original to the railroad shed. 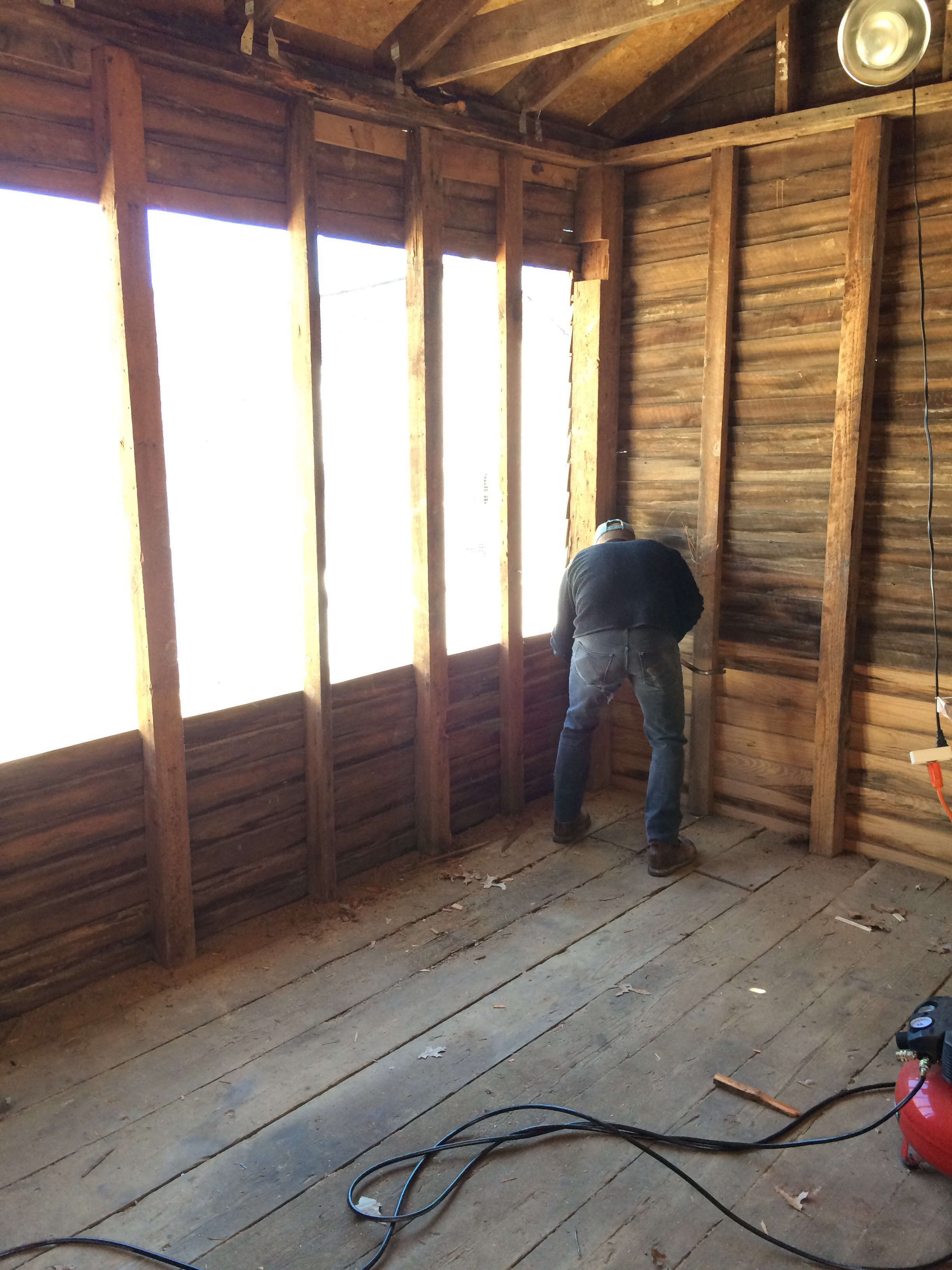 Above: “The structure only had studs and exterior paneling exposed to the inside,” Chris says. The team added insulation before covering the interior walls with shiplap. 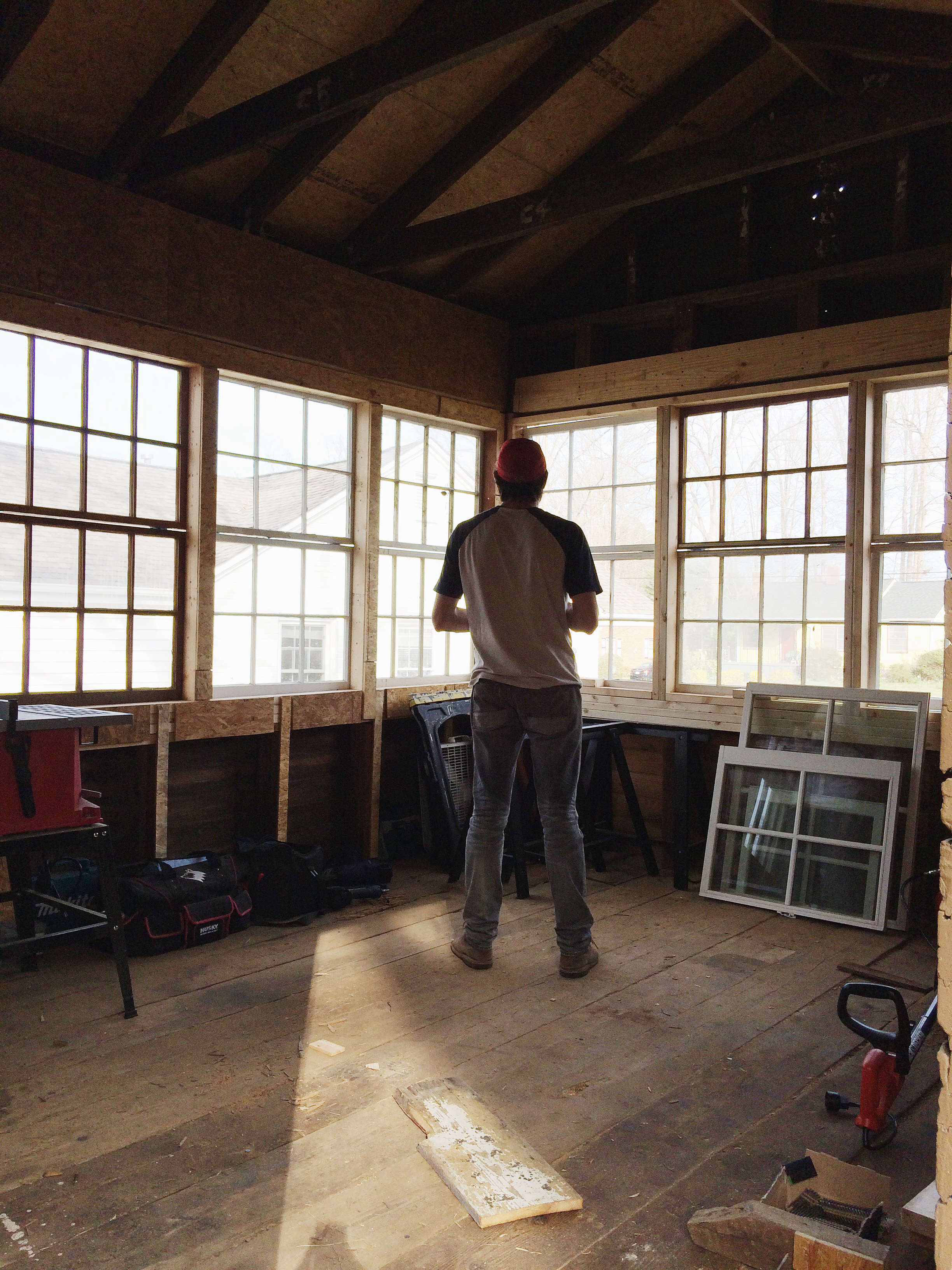 Above: The windows were another old find made new. “We knew we wanted to use as many reclaimed materials as possible, and we envisioned the windows being a large part of that,” Chris says. The couple purchased the six- and eight-panel paned windows at an antique shop and their architect designed the window framing to fit their mismatched finds. 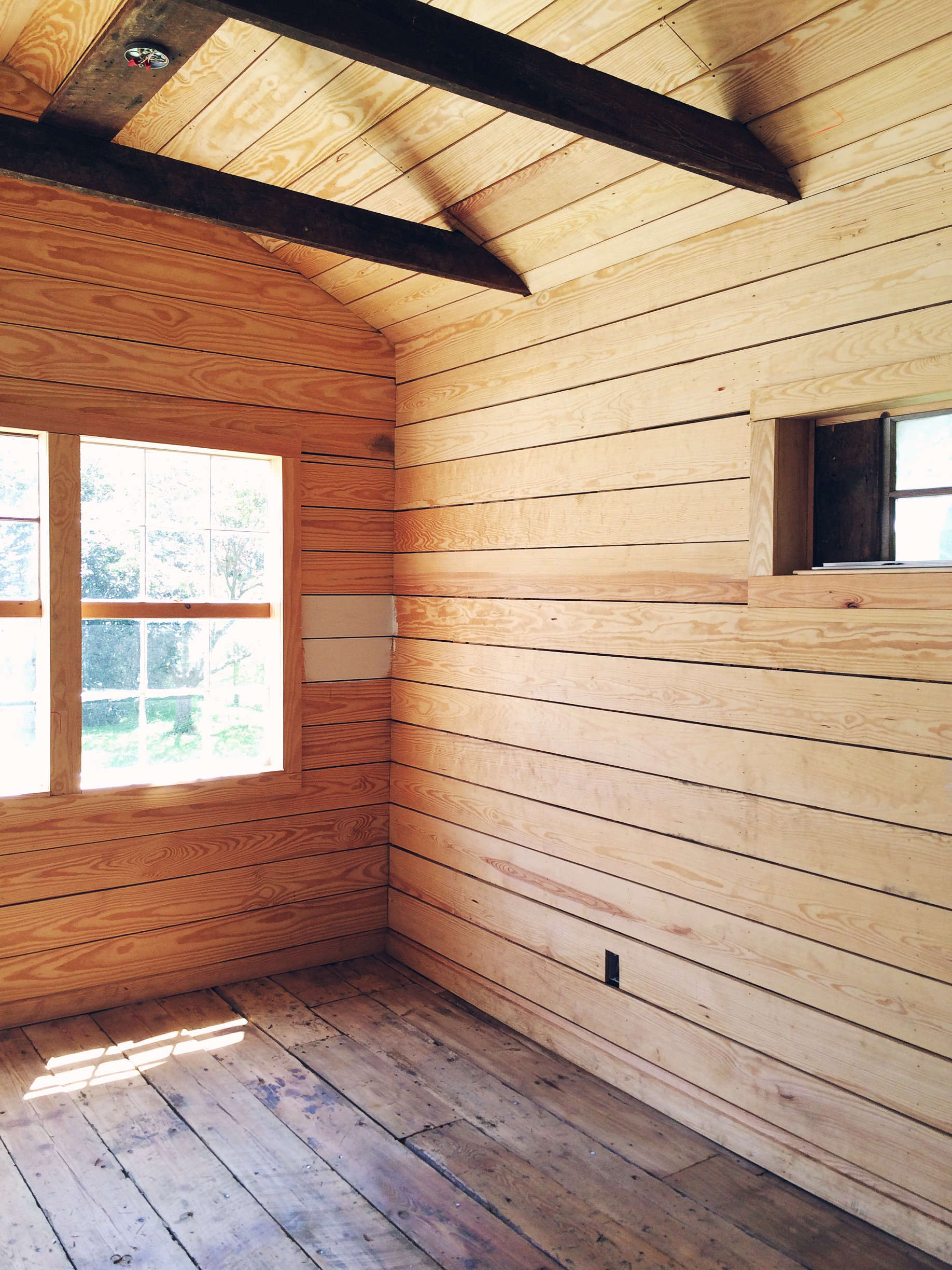 Above: The interior wood shiplap is Southern yellow pine that the couple sourced from a local building supply company. The couple preserved the original hand-hewn oak timber ceiling beams. 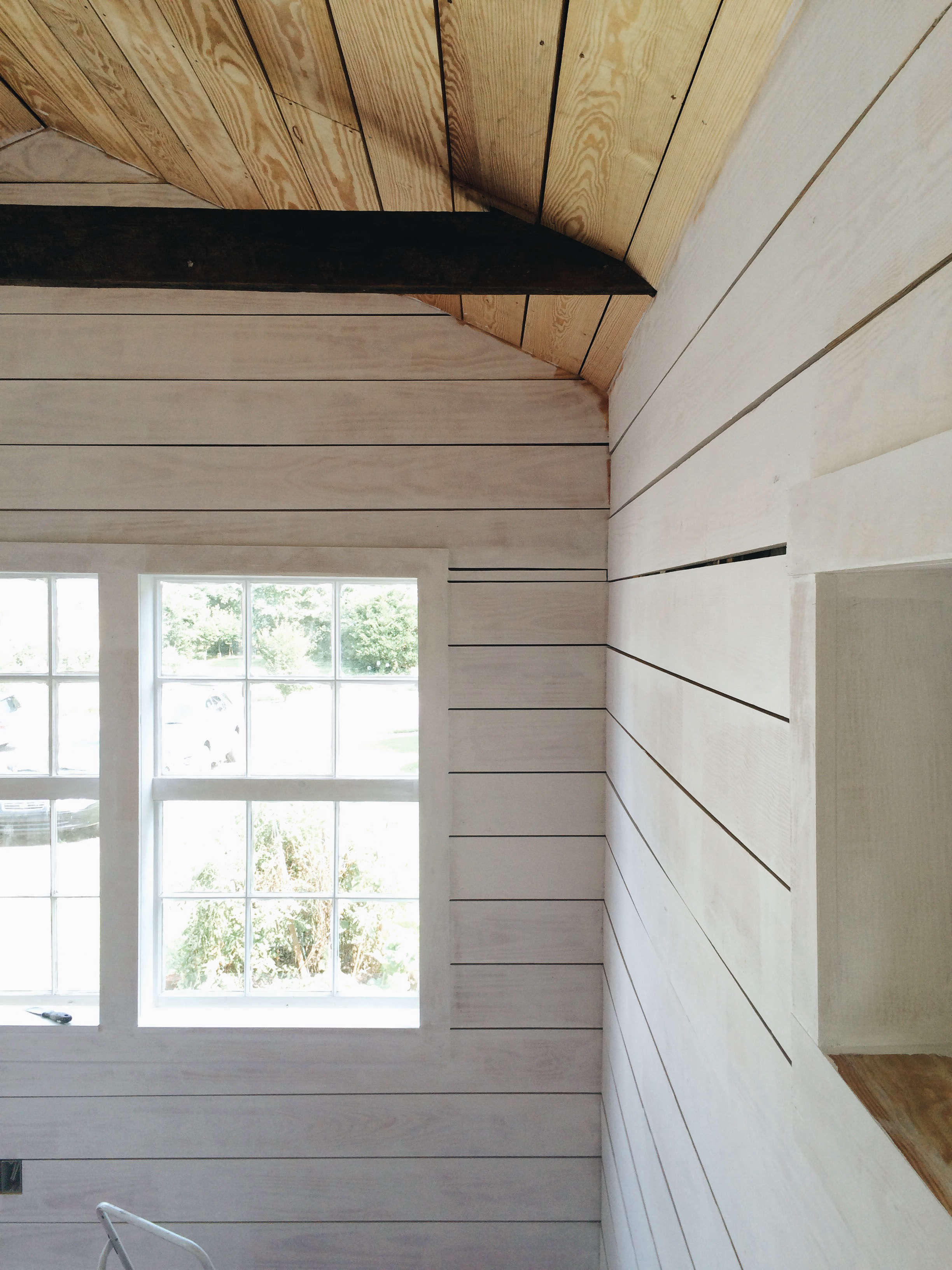 Above: The walls are primed for a coat of Benjamin Moore Cloud White paint, which was used throughout the interior. 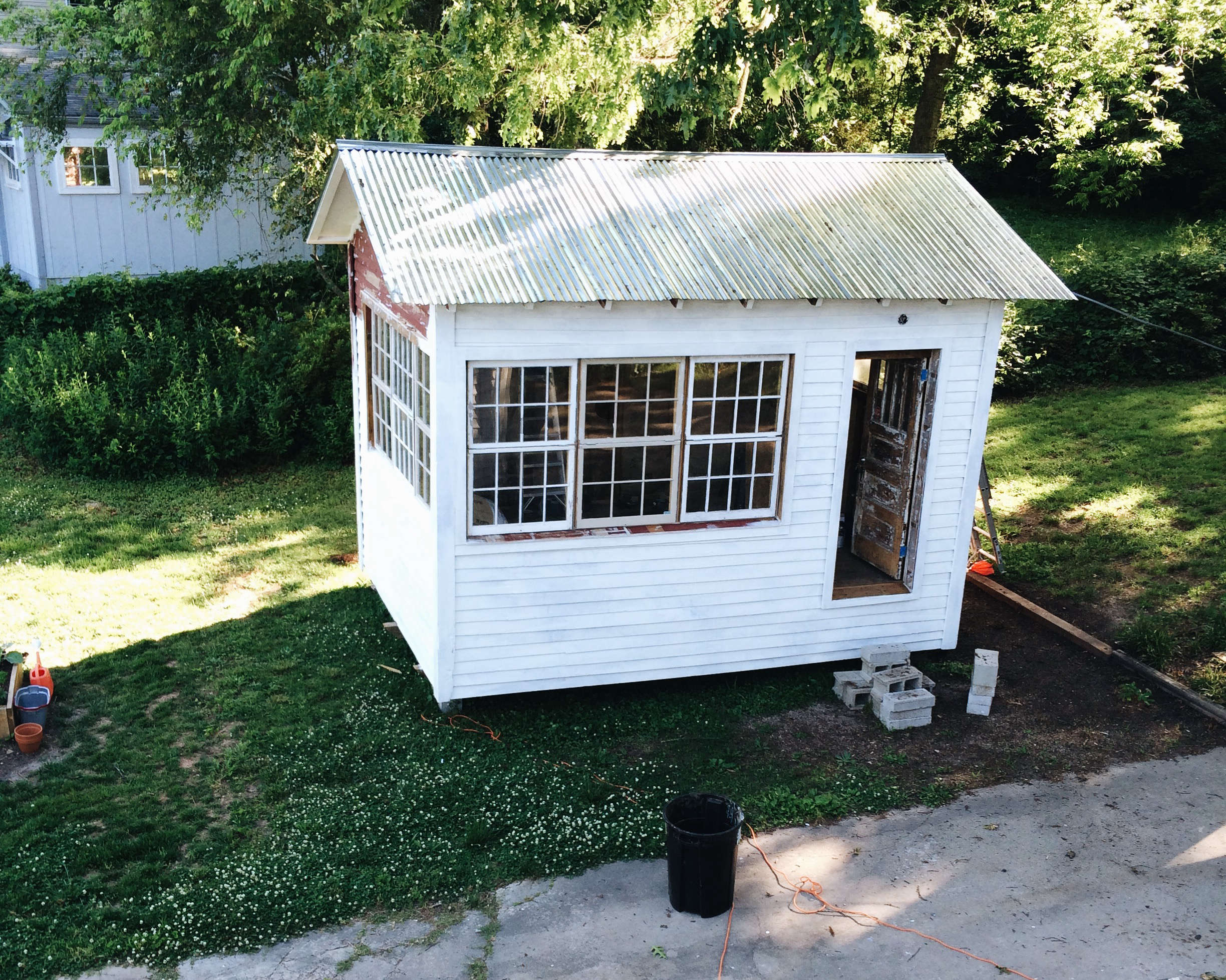 Above: The in-progress shed in its new location. After the couple purchased the shed at auction, they wanted to replace its shingled roof, “which didn’t pair well with the other details and materials or the aesthetic we envisioned,” they say. They chose metal for a modern touch. 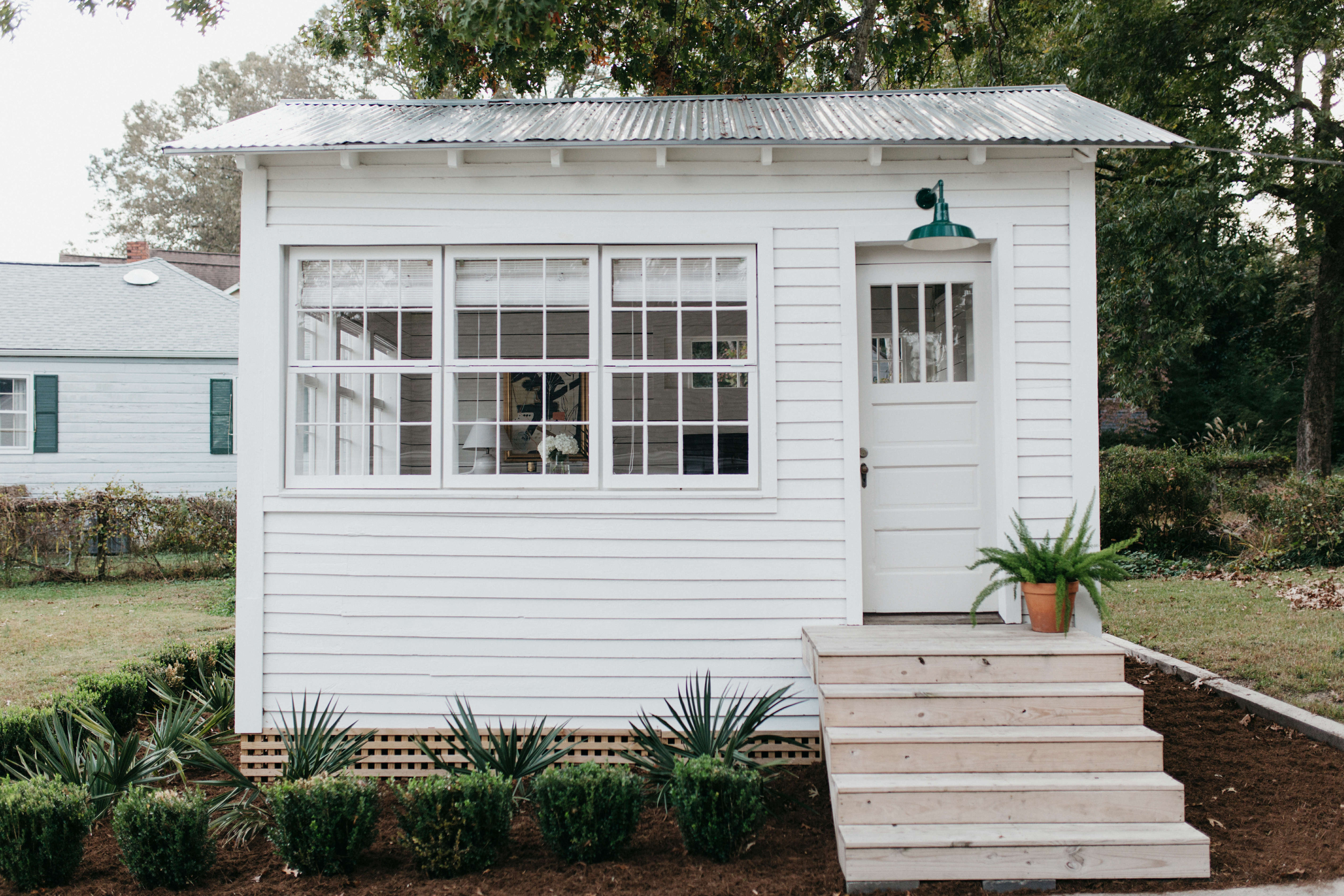 Above: At last: the finished studio. But moving the former railroad shed into a suburban garden required a lot of landscaping work: “Prior to moving the shed to our property, we removed overgrown shrubs and small trees” and slightly graded the area, Chris says. The team preserved a large oak tree nearby (just out of frame to the right), trimming some branches to make room for the shed at its base. Then, the couple worked with landscape designer Corey Mason to line the surrounding beds with triple shred mulch and to plant Sabal Minor palms and Baby Gem boxwoods to soften the studio’s exterior. Photograph by Brett & Jessica Photography. 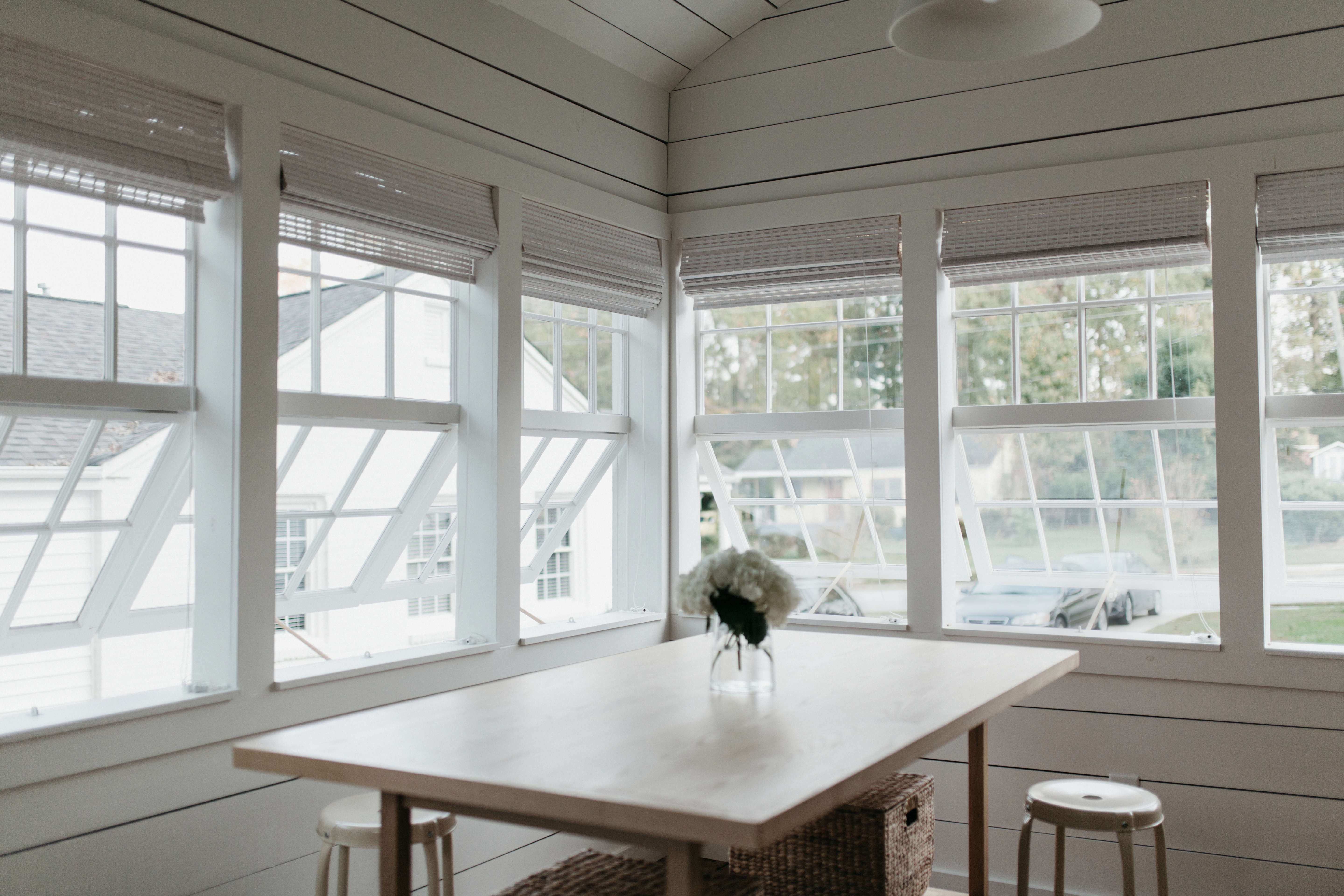 Above: A workspace for creative brainstorms. In addition to more light, Chris and Elizabeth wanted a feeling of openness and fresh air. Their architect retrofitted the antique windows the couple had found: By connecting top and bottom window sashes with a hinge, the lower portions swing outward and can be propped up with a dowel, letting in a cross breeze. Photograph by Brett & Jessica Photography. 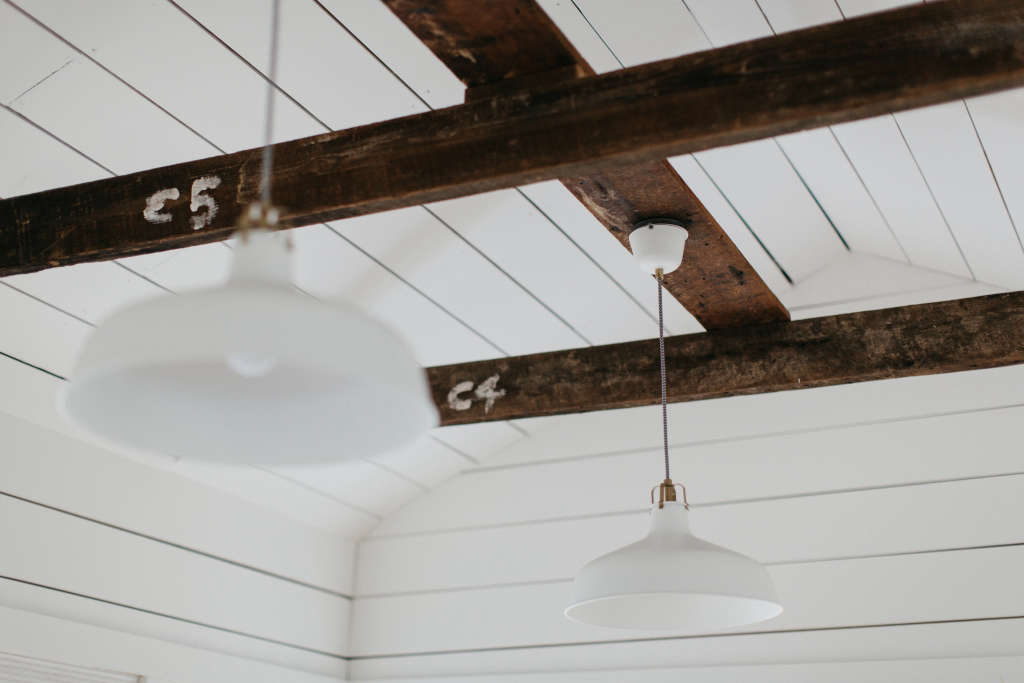 Above: The original ceiling beams offer a subtle reminder of the hands-on renovation process: “When we found out we had to dismantle the roof before moving, we weren’t exactly sure how we would rebuild it,” Chris says. “So I numbered each and every ceiling joist and rafter using a can of leftover paint and my finger as a brush. As it turned out, we didn’t end up reusing all of the joists in the new roof, so the numbering system wasn’t needed after all. We chose to leave the beams natural and therefore the numbers remained.” Photograph by Brett & Jessica Photography. 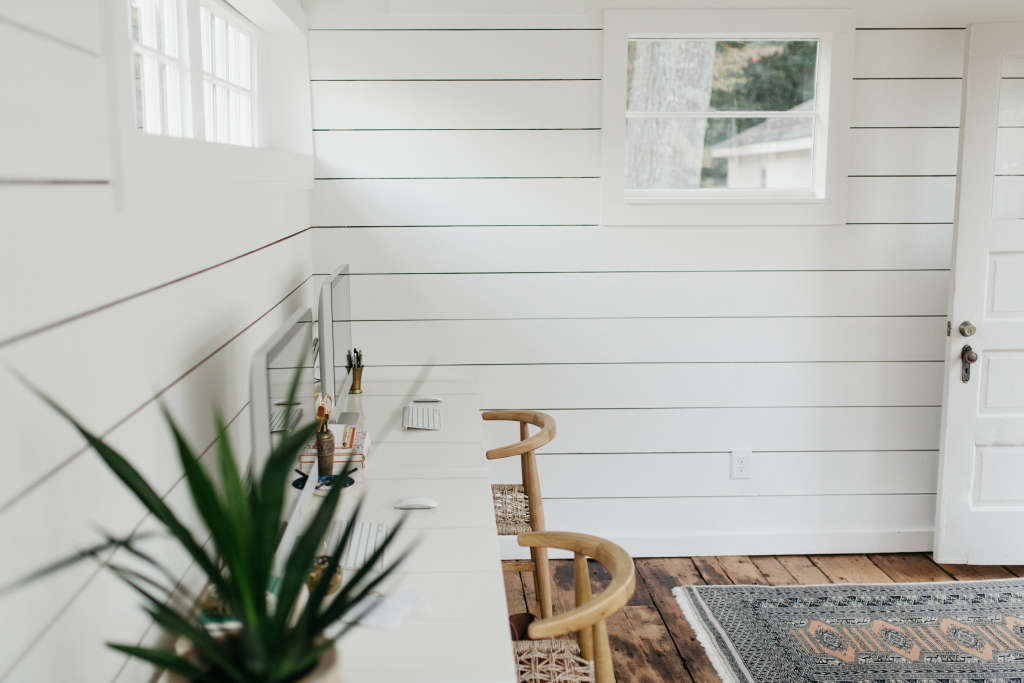 Above: The couple’s neat and tidy new workspace—complete with a touch of green. Photograph by Brett & Jessica Photography. 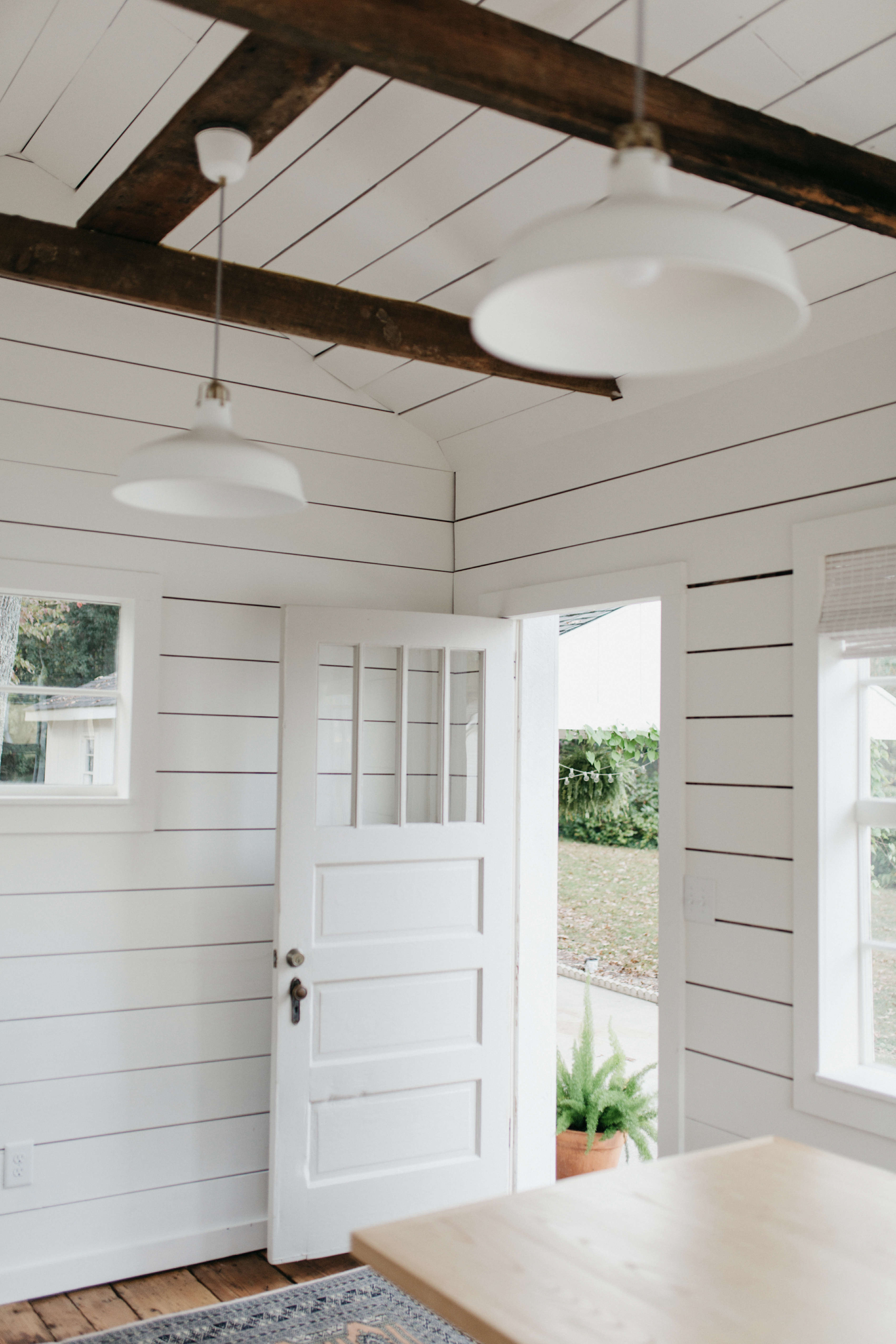 Trending on Remodelista: Deck the Hols

Before and After: Big Box Meets Local for a $550 Porch Makeover in Portland, Maine