The Pig at Combe is the latest addition to hotelier Robin Hutson’s collection of informal, luxurious boutique hotels in the south of England. Opened in July, it has been fully booked ever since.

Photography by Will Venning, except where noted. 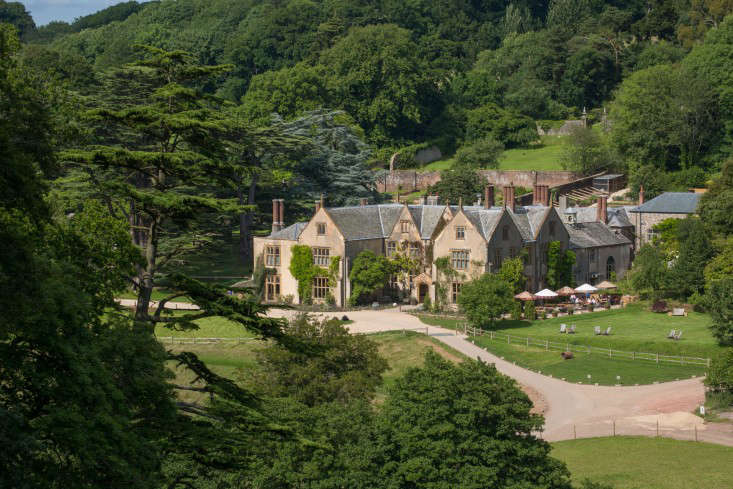 At Combe, Hutson and his wife Judy have de-formalized a grade I listed Elizabethan Manor house just outside the Devonshire village of Gittisham in the dreamy Otter Valley. 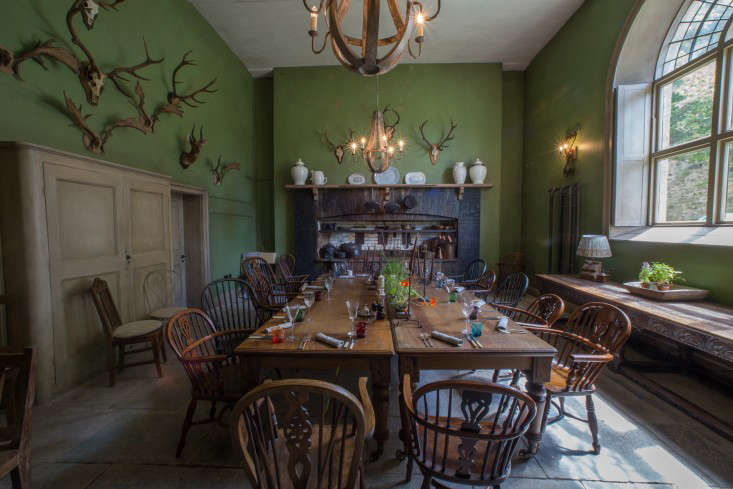 The Pig’s trademark aesthetic—mismatched vintage furniture, roaring fires, informal dining rooms, and incredible original features—has formed a loyal following of mini-breakers keen to tick off a stay at each of the five properties. But as significant as the vast beds, deep floral sofas, and bespoke minibars, are the kitchen gardens. “They really are the beating heart of each hotel,” says Ollie Hutson, senior gardener across the properties (and Robin and Judy’s son). We take a tour of their latest transformation … 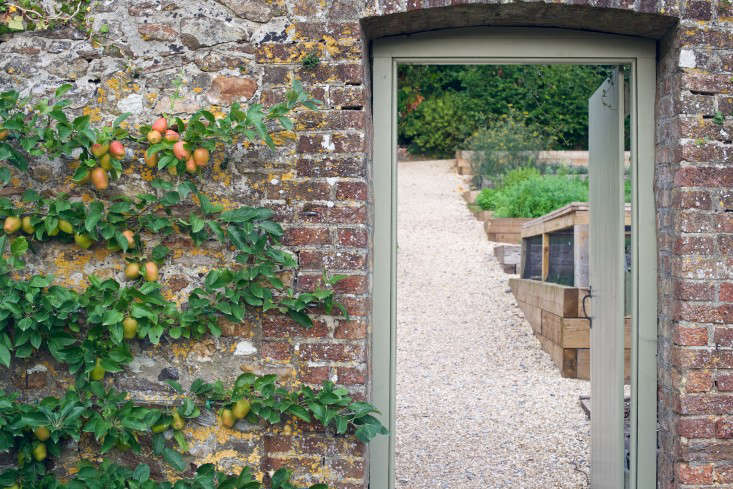 Above: The kitchen garden at Combe was planted just six short months ago, in March 2016. “As with all our projects, this was about doing justice to the gardeners who have come before us,” says Ollie. It’s a decree they take seriously at Combe, not least because gardener Ron Hutchinson, age 70, is still employed at Combe House, the last in a long line of Hutchinsons who have worked the land here. 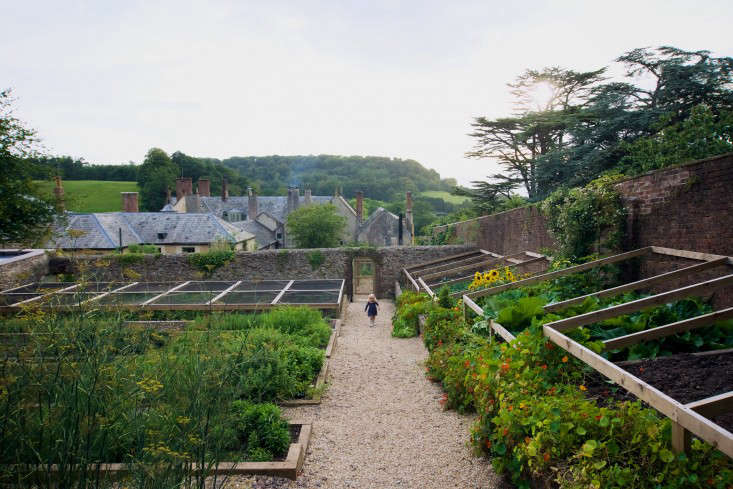 “We harvest three hundred sixty-five days a year. There’s not a day we don’t work in the garden,” Ollie explains. The planting and harvesting schedule is rigorous, with the head chef walking the gardens every couple of days to determine what produce is at its peak, adjusting the menu accordingly. What cannot be plucked directly from the grounds is sourced from within a 25-mile radius. What’s not served in the dining room is either pureed or bottled and infused behind the bar. 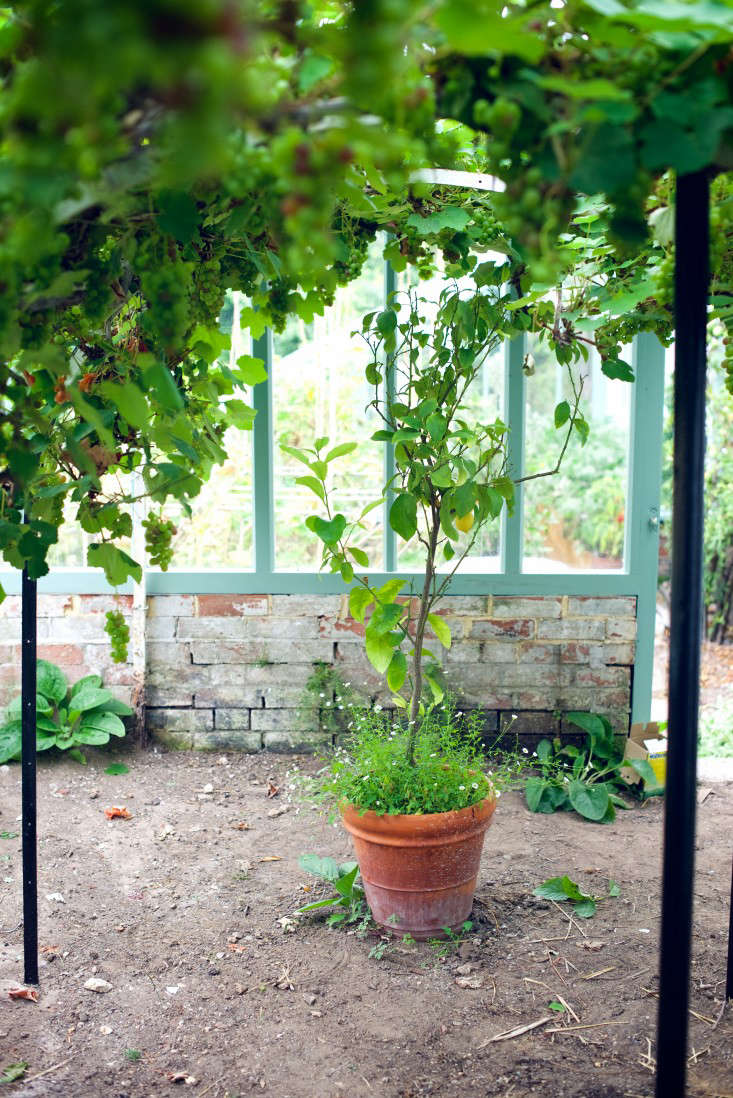 Above: During the landscaping, more than 2,500 plants were saved and re-positioned and two of the original Victorian greenhouses were restored. Chillies, aubergines, and peppers grow in one; a Victorian vine flourishes in the other. A lemon tree sits beneath the vine, its fruit now steeping in bottles of vodka behind the hotel bar. The “lemon drop” chillies are used to add some heat to Bloody Marys (a stick of red-stemmed celery functions as an edible stirrer). 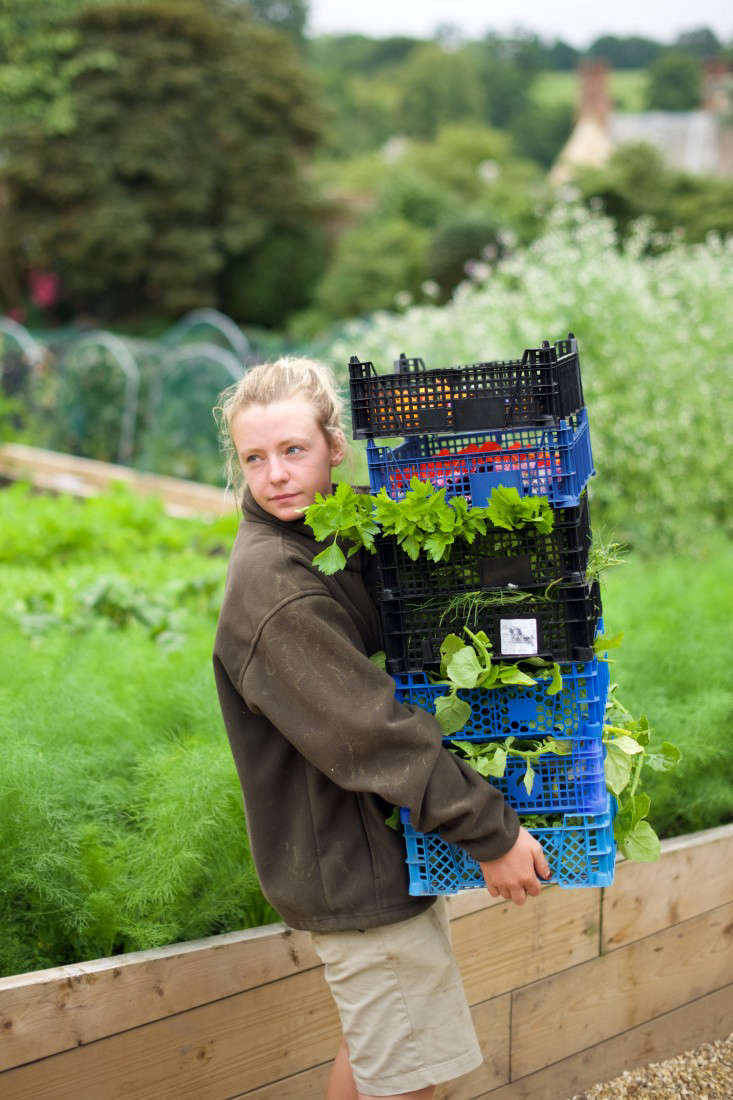 Above: Each morning, the gardeners deliver trays of carefully weighed fresh produce to the kitchen, including just-picked edible flowers. Marigolds, blue and white cornflowers, and white borage flowers are strewn upon diners’ plates or frozen into ice cubes for gin and tonics. 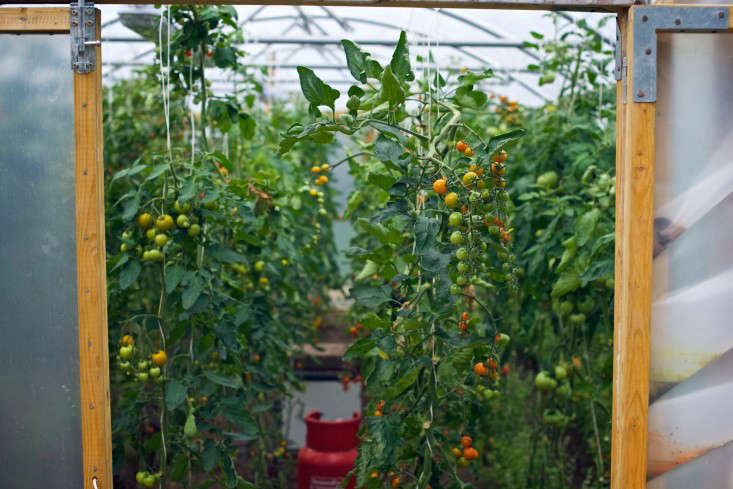 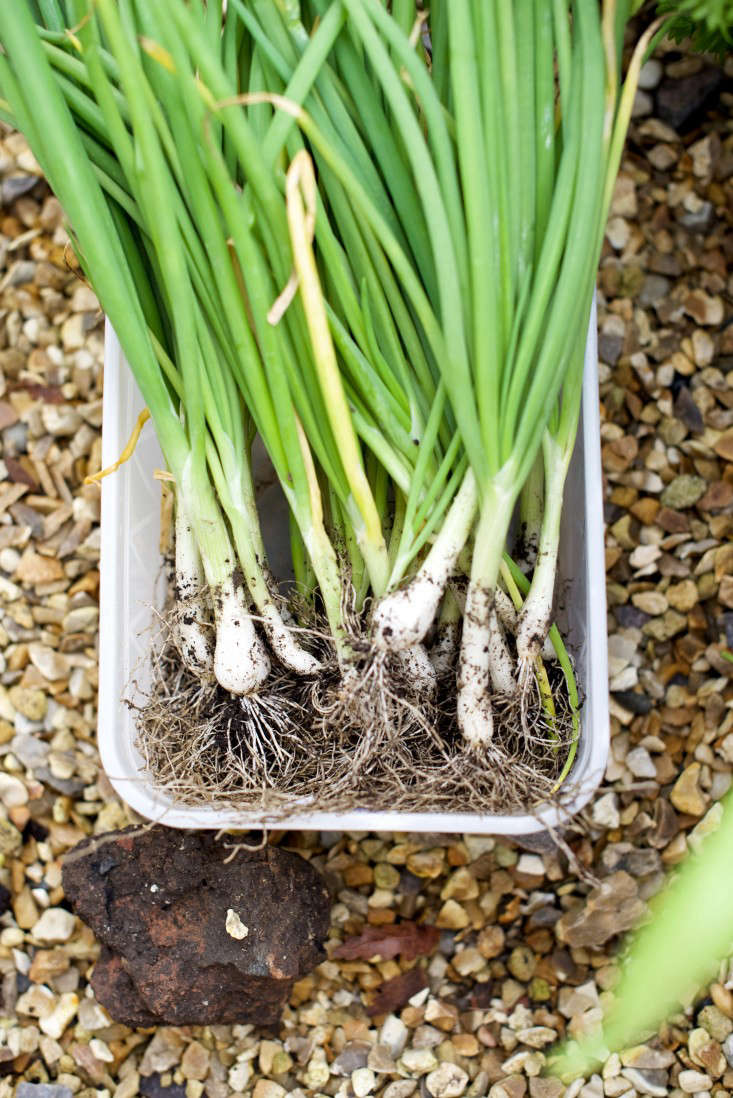 Above: The vegetable beds are full of British stalwarts: leeks, ‘Crapaudine’ beetroot (“the earthier the better”), kabocha and ‘Table Star’ squash, three varieties of courgette, and forced rhubarb. There are also more experimental crops growing such as multicolored ‘Fiesta’ sweet corn, oyster plants, and sea kale.

In the vast fruit cage are green and red gooseberries, raspberries, tayberries, red and black currants, ‘Gariguette’ and ‘Mara des Bois’ strawberries, and the white variety ‘Alpine’, which can be found peeping through the mesh at ground level. 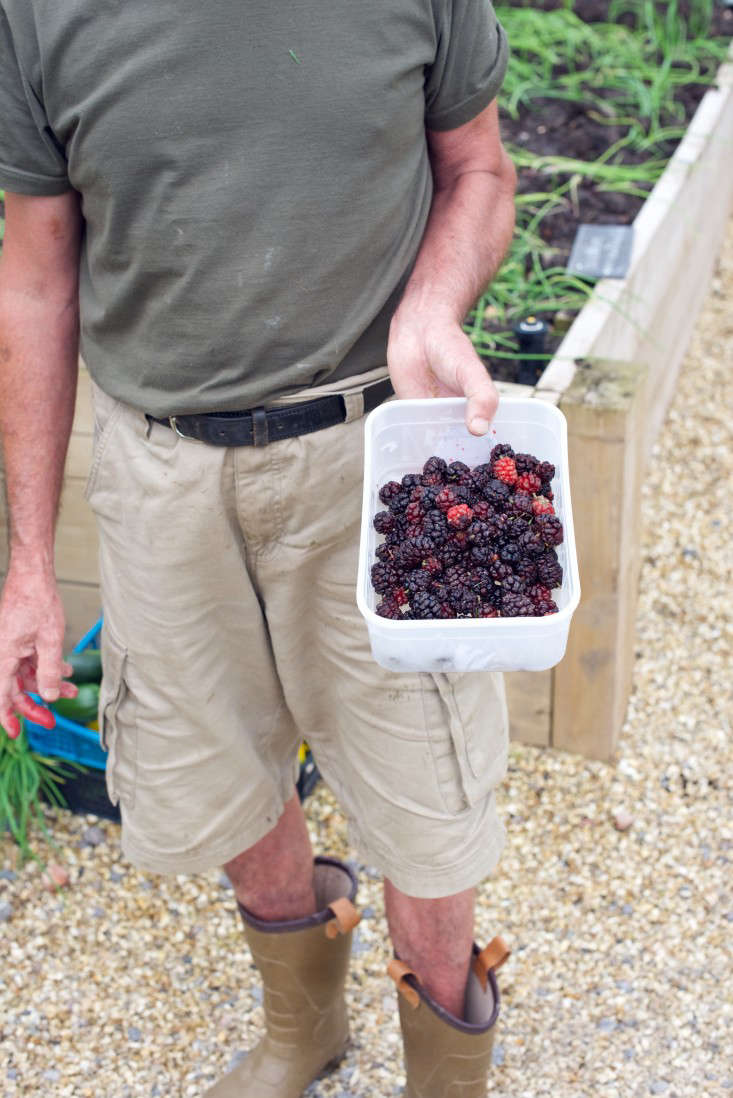 Above: All garden fruits—including these mulberries—are simmered down to form purees for seasonal Bellinis or sandwiched between layers of sponge and served at afternoon tea. 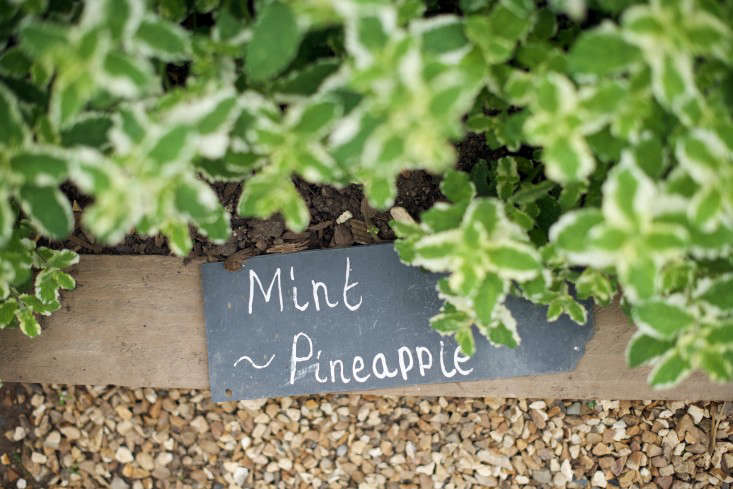 Above: Beneath the established espaliered quince, apple, and plum trees are eight varieties of mint. Ollie’s greatest passion is herbs. At Combe, he has planted a sweet shop of flavors: blackcurrant, tangerine, and pineapple sage as well as pineapple and chocolate mint, which is used behind the bar as a garnish for chocolate martinis. Lemon verbena and lavender are transformed into syrups for desserts and cocktails. 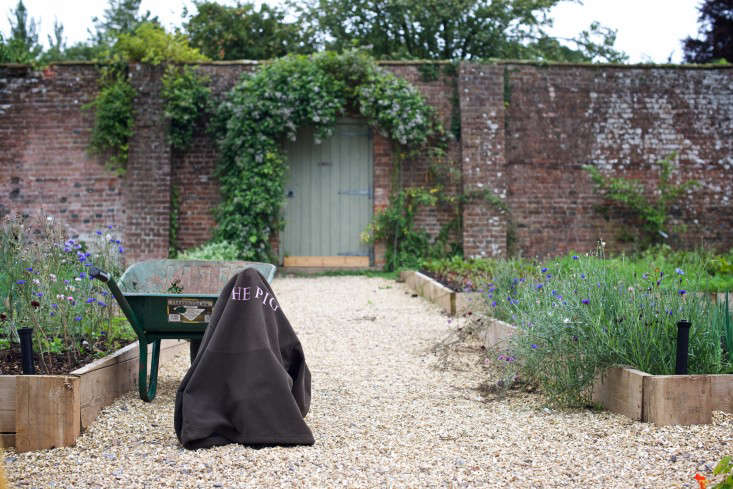 Above: Outside the two treatment rooms—which have been converted from an old potting shed—is a walled infusion garden where guests can choose from a menu of fresh infusions such as nettle and lemon balm, rosemary and ginger, lemon verbena or sage and honey. 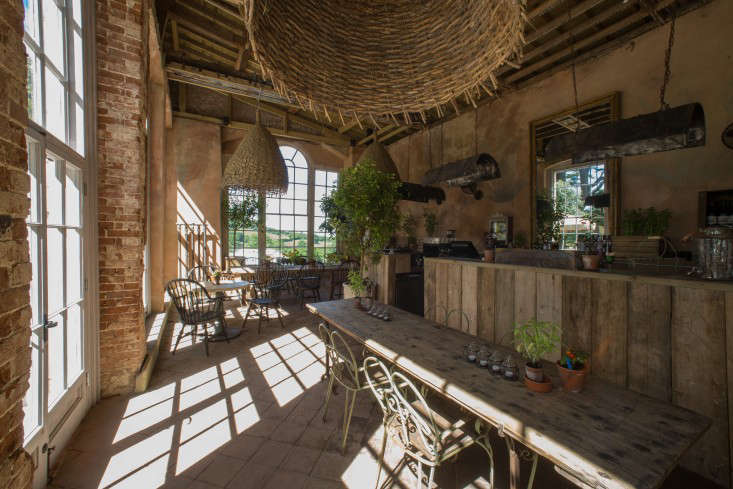 The Edwardian folly has been semi-restored into an indoor-outdoor bar and informal area for tea, cake, wood-fired flatbreads, cigars, or cocktails. 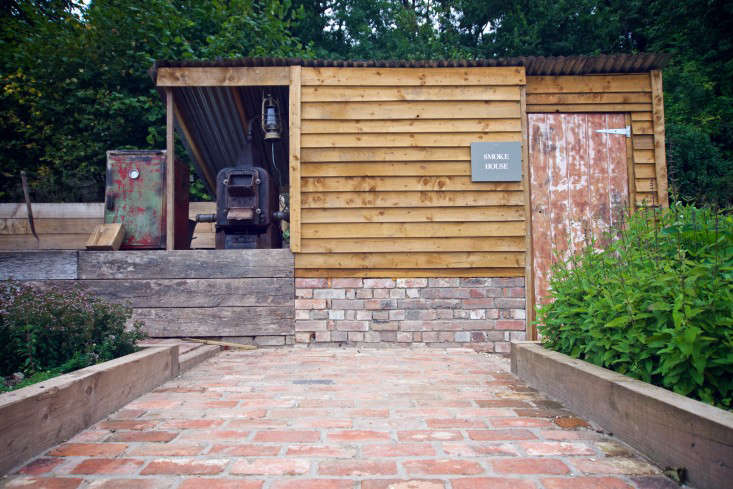 Above: An old boiler that was found during the restoration has been converted into a smoker. Inside the cold smoker I found a tray of sea salt for the tables, and a giant bunch of smoked sage destined for a bottle of infused vodka. 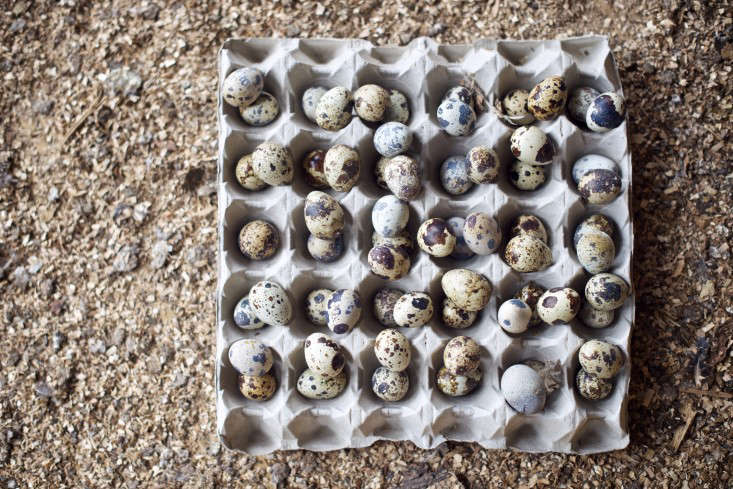 Above: In the far corner of the kitchen garden is a large coop of highly productive quails. Each morning, their eggs are collected and turned into one of the Pig’s signature bar snacks: miniature hock quail eggs with Coleman’s dressing. My daughter, Betsy, helped collect the eggs, and devoured them later at the bar with a glass of pureed plums, soda water, and crushed ice. I ended the tour with a sour garden cocktail (see recipe below). 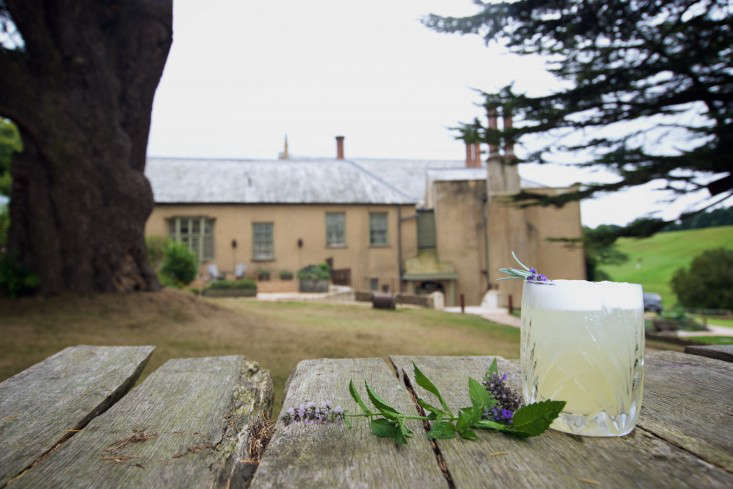 Combine the vodka, syrup, and juice and shake with egg white and ice. Serve with a lavender sprig and bitters in a Hobster glass.