The first time Jen Catto saw the brownstone that would become her home in Brooklyn’s Crown Heights historic district, the “back garden” consisted of 6-foot-high weeds surrounded by a prison yard chain link fence. Then while the house was being renovated, the contractor stored construction debris there. Two years later? The house looked great; it was time to fix up the yard–with a little help from friends.

“During the renovation, we crowd sourced a lot of information from friends,” says Catto. “So when it came to the garden, the first thing I did was look for a sounding board. We have a really good friend who is a landscape architect in Boulder, and she gave me lots of ideas.”

Landscape architect Mimi Mather, a principal at Root House Studio, contributed more than ideas. She offered to fly out to help in the yard. Says Catto: “We decided to throw a planting party.”

Brunch would be involved, of course.

But first Catto had to prep the garden. “It took about four weekends to get it ready,” she says. “I filled seven huge industrial garbage bags with concrete and glass.”

Beneath the rubble, the backyard had existing soil to a depth of about six inches, which meant Catto needed to add about three more cubic yards to the planting beds.

Also: “We have a huge hundred-year-old-plus ginkgo tree that had lost limbs during Hurricane Sandy, and we had to clean up the branches,” Catto says.

How do you get rid of so much debris when you live in a city? Do you just haul it to the curb? 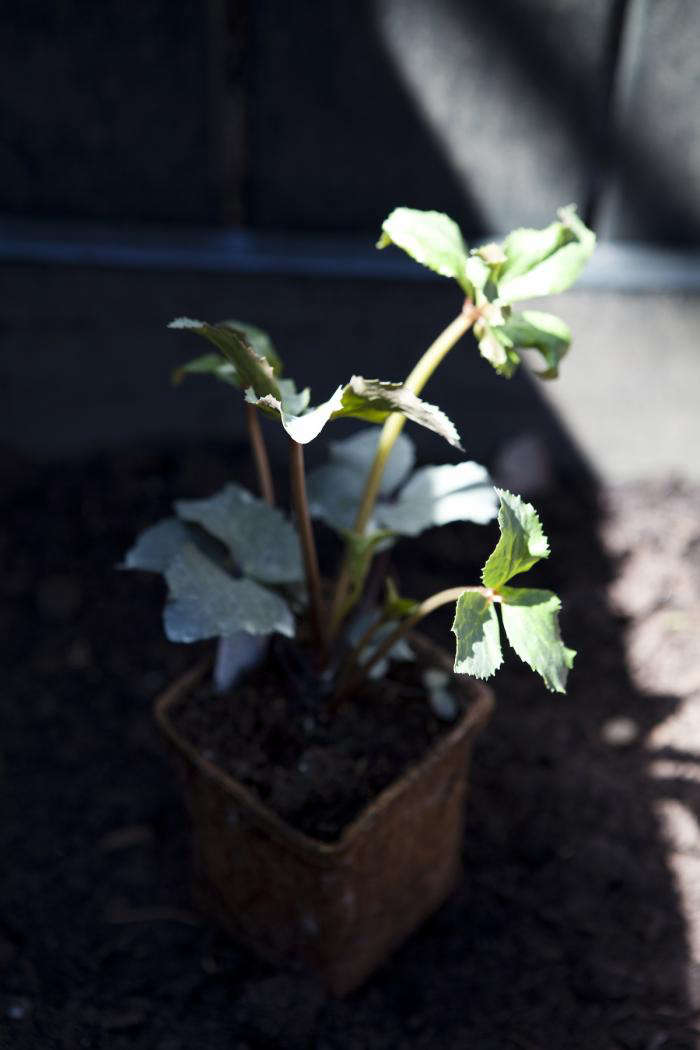 Above: Getting the three cubic yards of topsoil delivered was a little trickier. “No one I called would do anything but drop it on the sidewalk, then I would have had to bring it all the way to the back in pails,” says Catto. “When am I going to have time to do that?”

Her luck changed after Catto went to a little local nursery four blocks from her house. “The owner helped me figure out how much I needed–one third of the mix was compost and the other two-thirds top soil–and then he delivered it in bags and carried it to the backyard for me.” 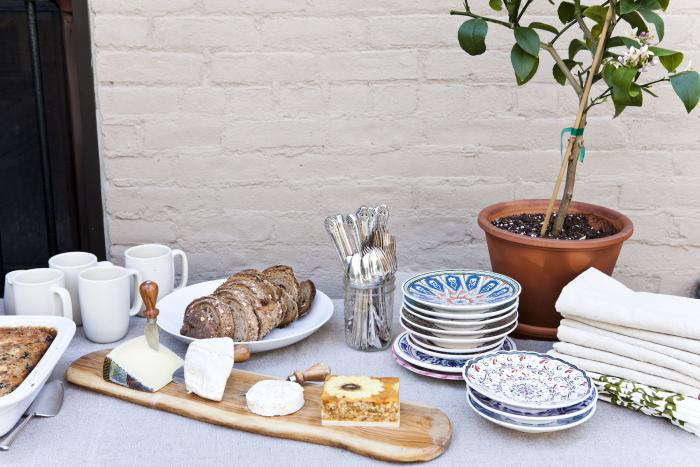 Above: The next major undertaking: the party menu. The planting party was planned for a Saturday morning in early April.

“I made a spring breakfast, including a wild mushroom flan with mushrooms we’d brought back from France and had been saving for a special occasion,” says Catto. 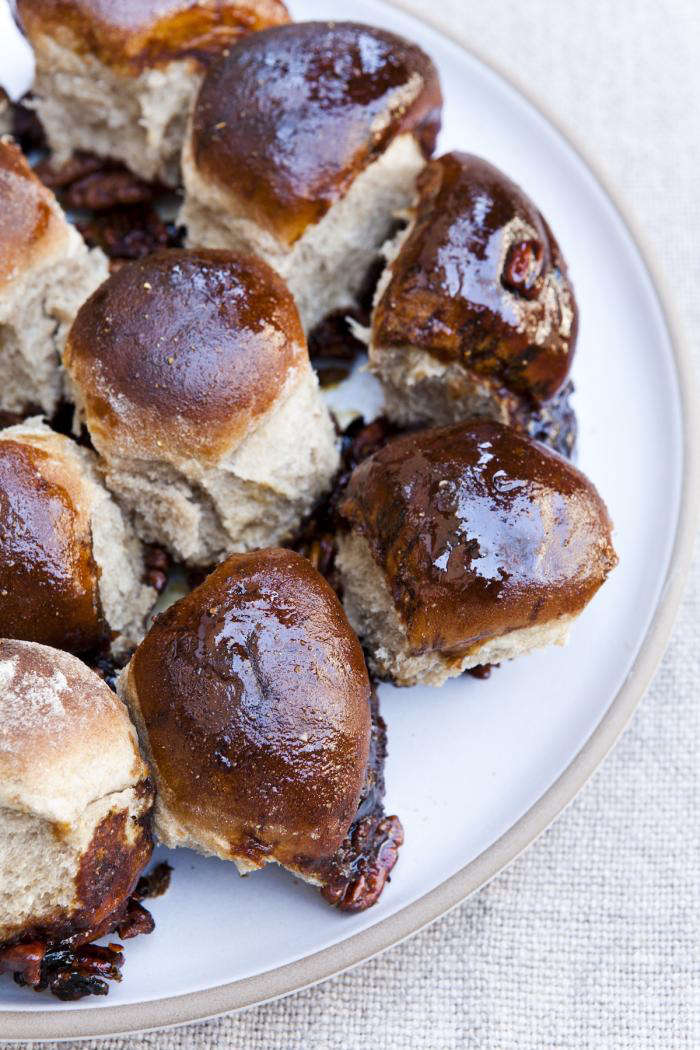 Above: The blood orange-chipotle Sticky Buns came from SCRATCHbread Bakery in Brooklyn. 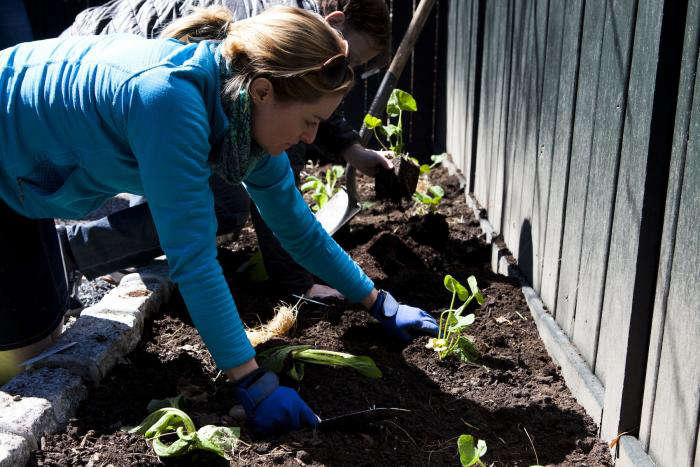 Above: Jen Catto plants seedlings in her backyard.

Before the party, Jen designed how she wanted to lay out the garden. Behind her house is a spiral staircase that connects the second-floor kitchen to a bluestone patio. The backyard is paved with french gravel, and three garden beds are laid out in a U shape along the perimeter.

“I wanted a palette of really deep aubergine colored purples–almost black–dusty pale rose, and chartreuse,” says Catto. “I used Keynote on my laptop to lay out all the plants, and at the party we all debated where things should go. It was crowd sourced.”

Catto bought 60 plants, including hellebores, ostrich ferns, Japanese painted ferns, black hollyhocks, astilbes, Camelot hollyhocks, and a Meyer lemon tree in a pot (so it can come indoors in the winter).

“I didn’t put anything edible back there because I was worried about lead and other things in the soil,” says Catto. “The house was a boarding house over the past twenty years before we bought it, and who knows what was back there? I found bones. I thought, ‘I hope this was a dog.’ ” 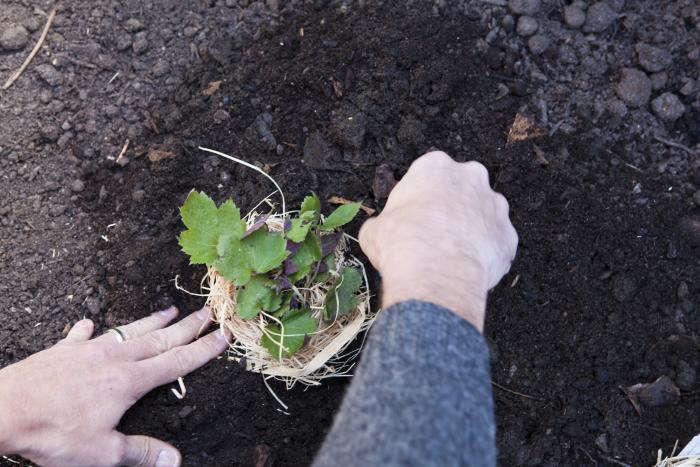 Above: The day of the party was sunny and warm: 52 degrees. Because it was early spring, the plants’ roots were wrapped in straw to protect them against a spring freeze.

“While the breakfast flan was in the oven, Mimi gave a tutorial to everyone about how to plant: take it out of the pot, loosen the roots,” says Catto. 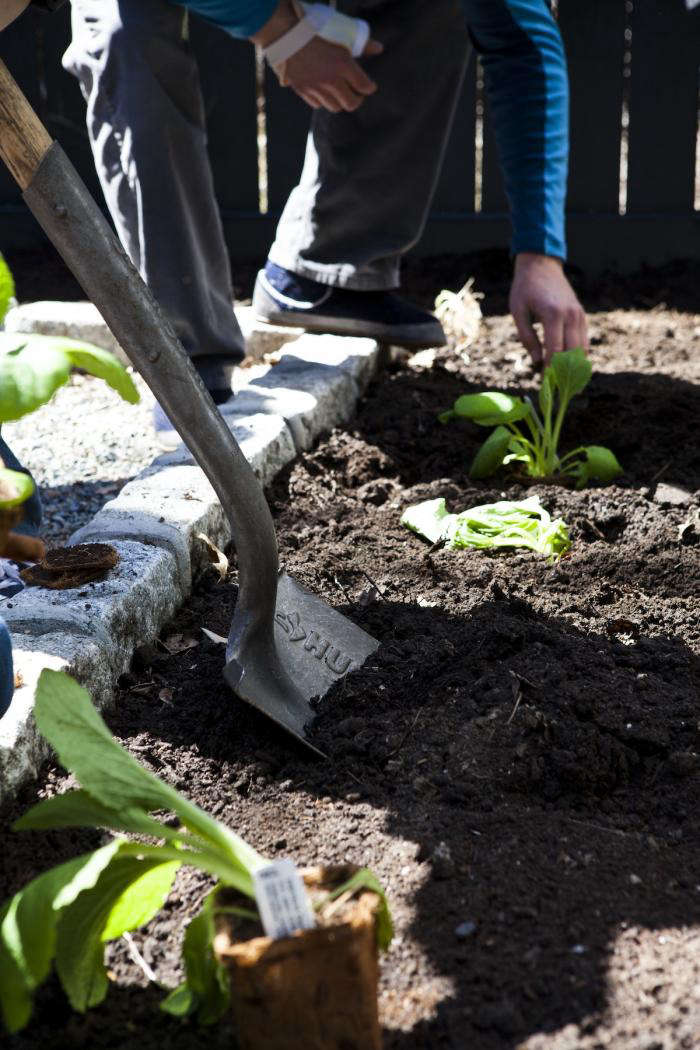 Above: Before the party, Catto ordered plants from Bluestone Perennials, White Flower Farm, and Wayside Gardens.

When purchasing plants, “I wanted to be economical, so I bought plants based on how the garden would look when it was all grown in,” says Catto. “I was disappointed when the plants showed up because in my head this was going to be a tumbling English garden.” 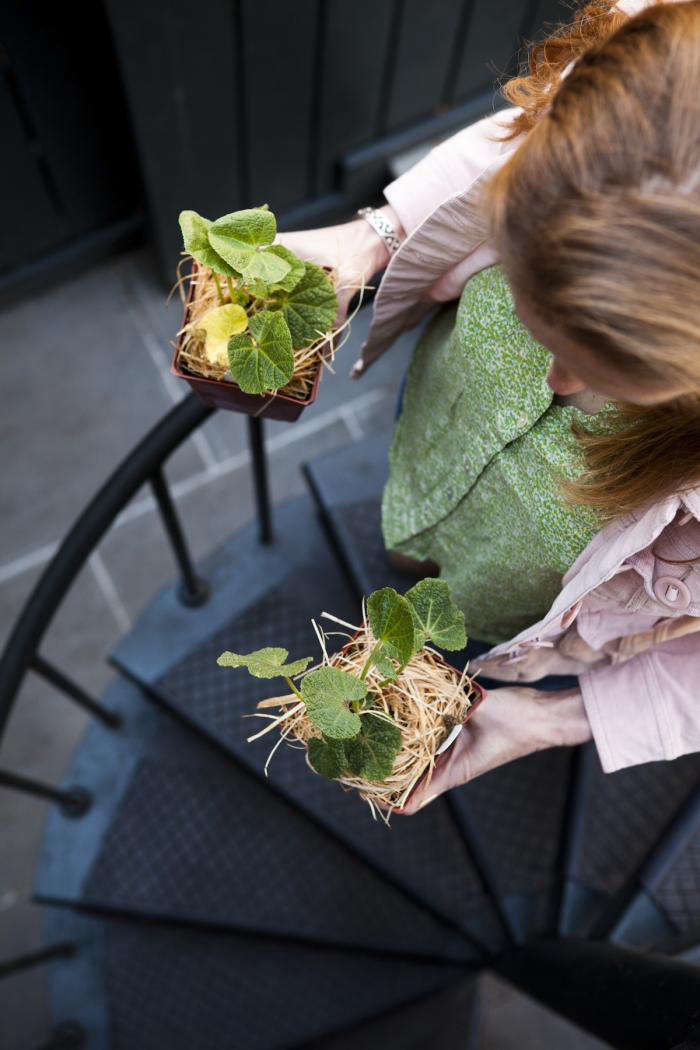 Above: But then Mather reminded her that in a couple of years, after the garden grows in, it will be so lush “it probably will need to be thinned out,” says Catto. 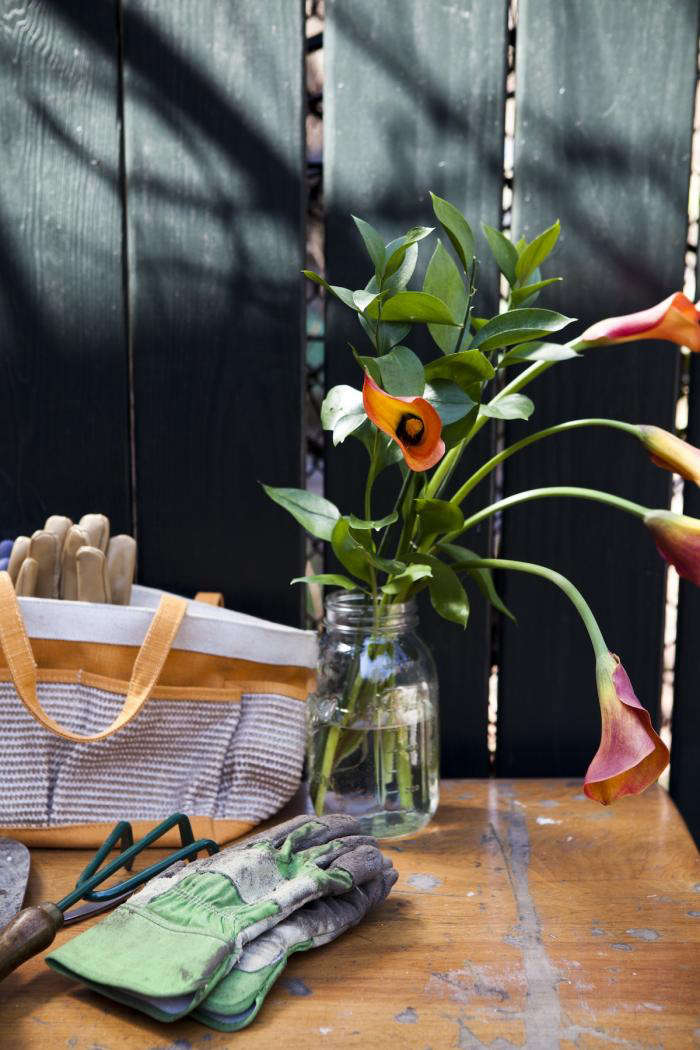 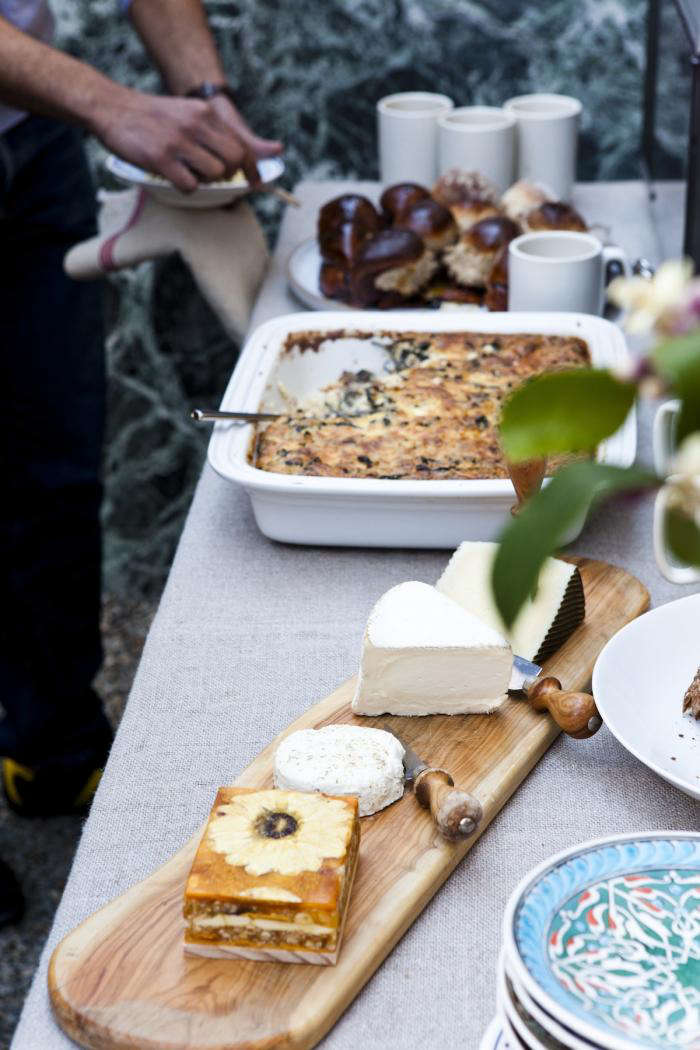 Above: The flower-topped fruit and nut press on the cheeseboard is from Grace & I.

Catto’s favorite breakfast flan recipe “is one I tweak seasonally, based on the best most foolproof recipe,”  she says. The original recipe is a Canadian Bacon and Cheddar Cheese Flan recipe from Food and Wine.  “This time I used a base of wild trumpet mushrooms, thyme, and shallots.” 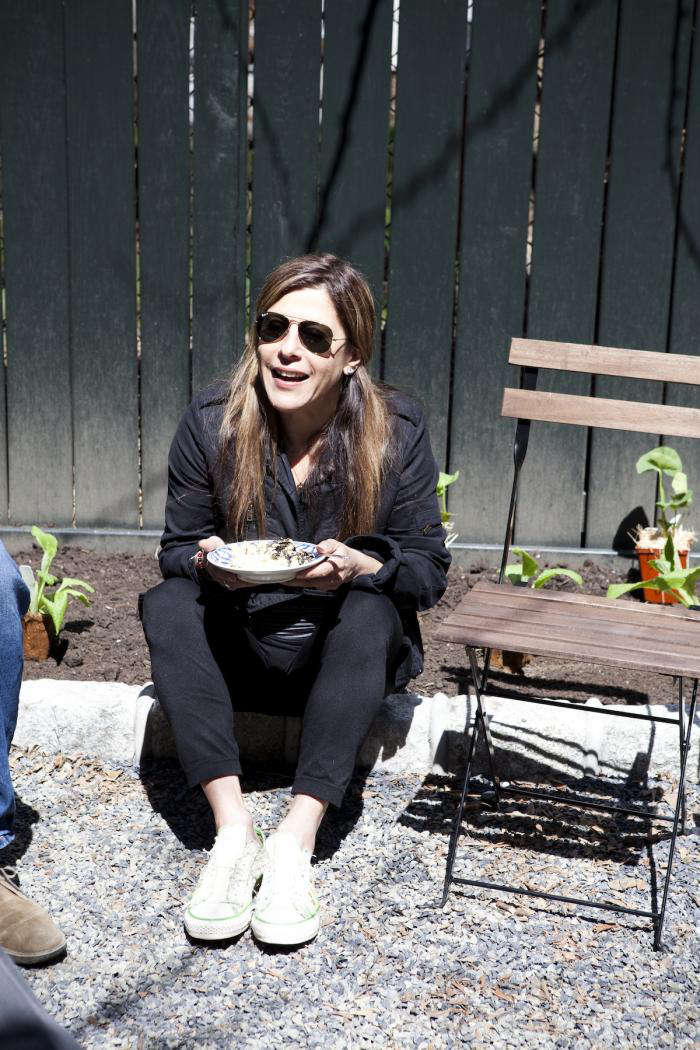 Above: “I have the best friends–three of them flew out from Colorado for the party,” Catto says. 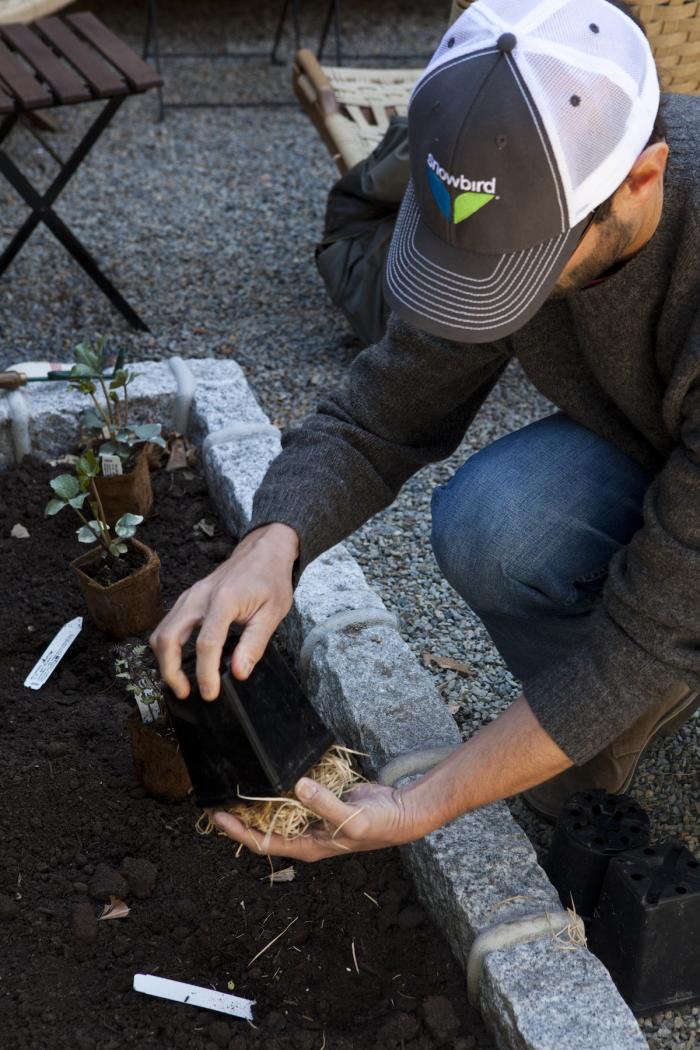 Above: “I have a whole fall bulb planting plan mapped out on my laptop in Keynote,” says Catto. ” I might have another party.”