The city that I live in promises to have everything, and yet, each winter there is a certain dearth of palatable tomatoes. Perhaps I am not the first to notice that the tomatoes in the supermarket–beautiful, orange-ish red and polished to a gloss–taste all wrong, somehow mealy and watery at the same time. But as a person who can bite into a good tomato and eat it like an apple (with or without a splash of balsamic vinegar), I have higher expectations. In a century when a man can fall in love with a disembodied voice–yes, I just saw Her–we should be able to find a winter tomato that actually tastes of tomato. So the other day I set off on a quest to find the world’s best-tasting tomato. In January.

Oh, reader. It turned out to be harder than I thought. And I had to taste some less than delicious tomatoes along the way. But in the end? Worth every bite: 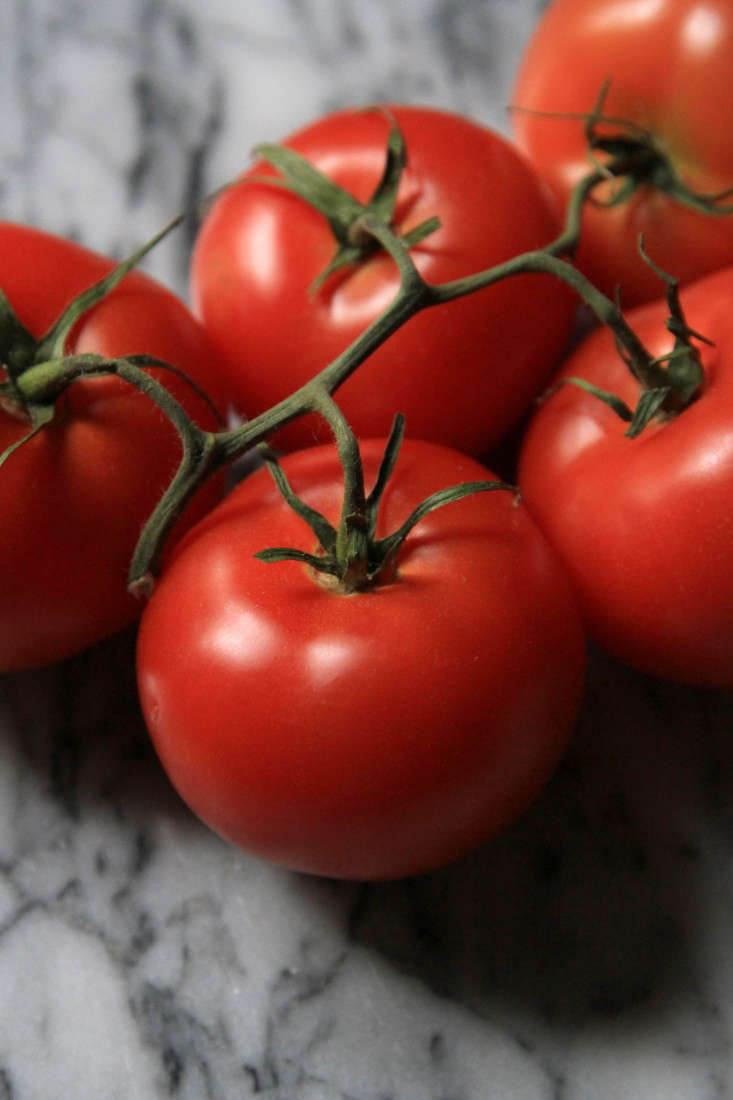 I have become suspicious about supermarket produce. Perhaps you can see why. It’s all so beautifully laid out, so polished and perfect looking, that it gives the impression it will taste good. This is not always the case (see Above)  and it makes me feel like a victim of false advertising. Plus, importing this produce from halfway around the world leaves a carbon footprint the size of Texas. Many  mass-produced, tasteless tomatoes grown in distant, warmer climates such as Florida were picked by laborers who live like slaves (see: Tomatoland, an excellent exposé of the industry). So I turned my back on New York City grocers’ pretty pretenders in favor of their ugly (but perhaps more honest) cousins: the canned and the jarred.

These are the tomatoes who have given up their pride. Tomato growing is a $2 billion a year industry in the US, and about 89 percent of the harvest meets this same fate. Before being preserved, canned or jarred tomatoes typically get peeled and sometimes soaked in brine. The look? Naked and salty. Like fingers after an hour in the bath.

But preserved produce comes from a rich tradition. Earlier generations of tomato lovers were happy to have it, certainly. It’s a new idea, and one that is basically confined to the instant gratification cultures of Europe and the US, that we should be able to eat any kind of produce year-round with no regard to its seasonality. If our parents and grandparents wanted to eat out-of-season fruits or vegetables when they were living in their little houses on the prairie, they had to plan far enough in advance to jar or can it themselves. 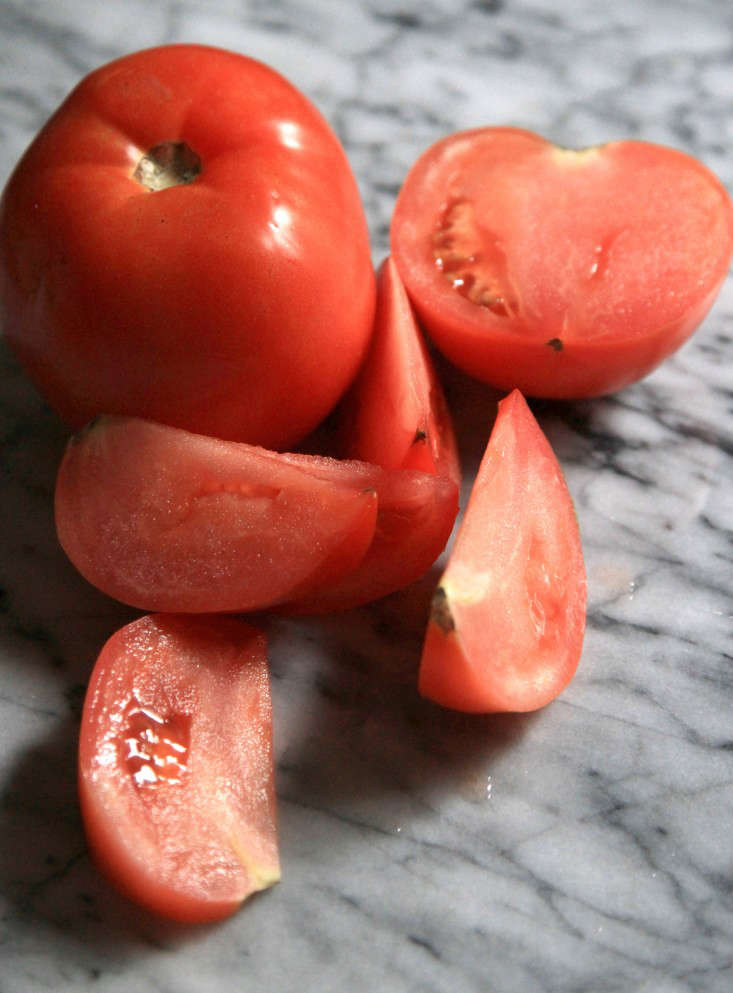 Above: In the US, tomatoes are the fourth most popular raw vegetable (trailing potatoes, lettuce, and onions). But would you eat these? Thought not.

Tomatoes, in their natural state, are not genetically outfitted to be bicoastal or to cross continents. It seems like an anachronism for produce to “go bad” these days, with all the genetic changes we have made to keep fruits and vegetables fresh. Basically, scientists have altered the genetics of tomatoes that travel–the jetsetters of the tomato world–so they will survive the trip and look fresh on the other end. But these modifications sacrifice nutrition as well as taste. 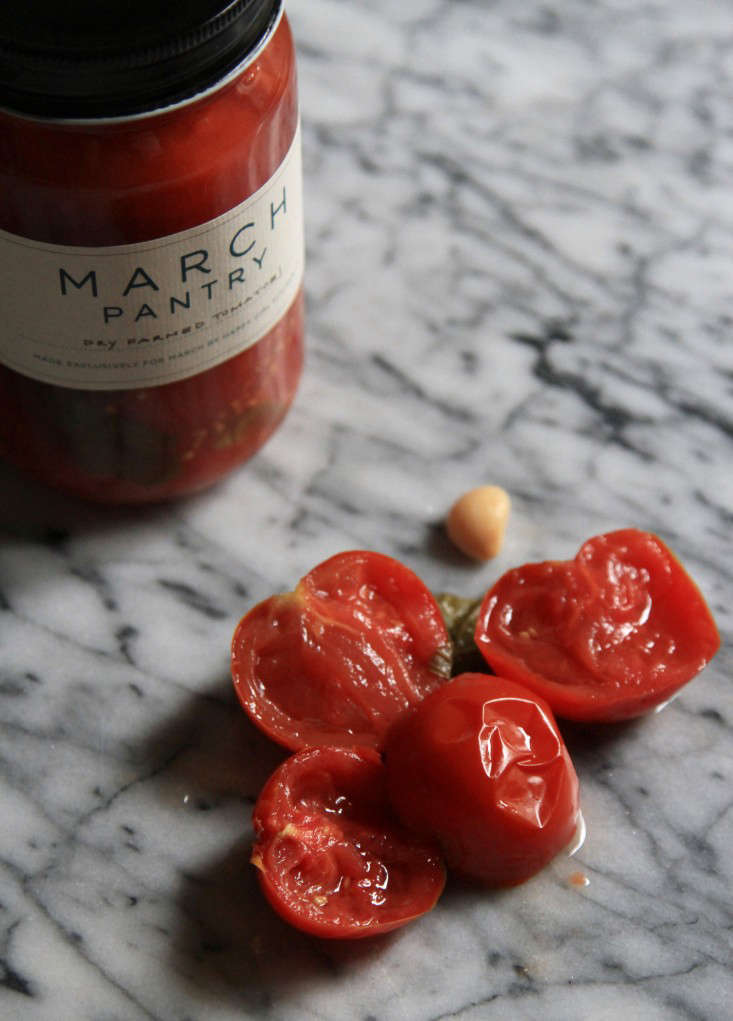 My scientific method: I decided it would be most fair to conduct a taste test of several brands of canned and jarred tomatoes, including both fancy and expensive brands and more modest supermarket varieties. Of course, I started with the most expensive.

Possibly the classiest tomatoes I have ever tasted are the dry farmed tomatoes from March (mea culpa: I had them shipped from California). One of the pitfalls of canned and jarred tomatoes is that they can taste salty or briny, which distracts the palate from that signature tomato taste–or can be used to cover up the fact that the tomatoes used were not high quality. That is not the case with March Dry Roasted Tomatoes. The tomatoes were clearly selected with care. Their texture is supple and soft; the tomatoes burst in your mouth with savory pop of flavor. I want to guzzle them like the strange, tart candy they are. Unfortunately, at $12 a jar, I feel I should probably refrain. These are tomatoes to be saved for a real occasion, when winter really feels like too much. 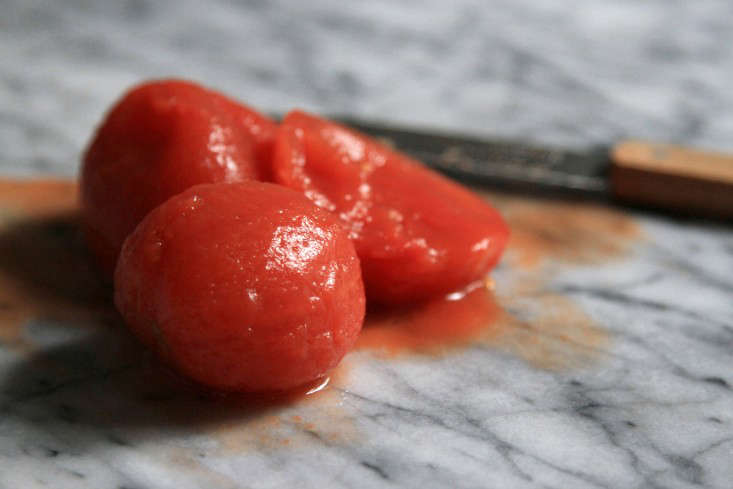 The next candidate: an organic option, whole peeled tomatoes from Bionaturae. Unlike the March tomatoes which had been jarred in the most aesthetically pleasing manner possible, the Bionaturae tomatoes are really no-frills. Green and white bits float around in the juice. Looking at those lumpy, peeled forms reminded me, somewhere in my mind, of hairless cats: cute but definitely missing something.

With Bionaturae, there is no brine and no added sodium. This is probably healthy. But the result is less flavorful than the saltier ones. No-frills, I think, is not necessarily the answer here. At $5 per can, these were significantly less than the jarred March jars, but still not cheap. 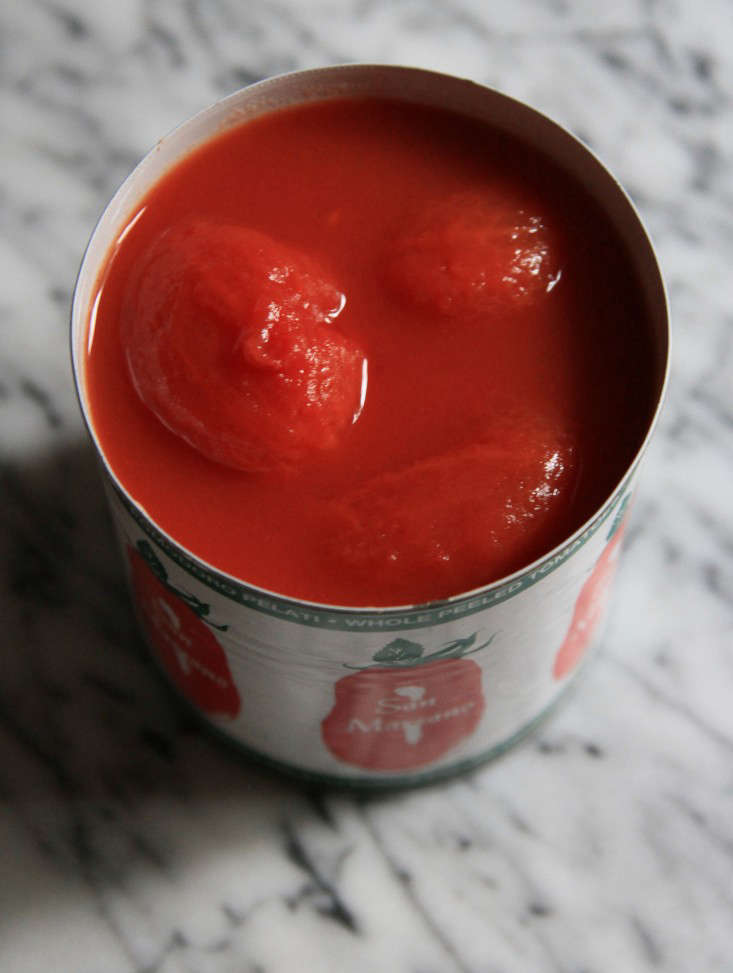 On to the obvious contenders: You can find San Marzano tomatoes without a hitch at your local grocery store. The packaging reminds me of home, where we used to make our own pasta sauce out of whole, peeled tomatoes from jars and cans. (Plus, you can use these particular San Marzano tomatoes to make modern art. The stacks of them in my kitchen look very Warhol). These tomatoes are saltier than the Bionaturae tomatoes, but not so salty that they taste fake. The juice that they are soaking in isn’t so much brine as what I’d call “tomato water.” The San Marzano tomatoes earned extra points because they proved perfect for a simple pasta sauce I made, í  la maison. 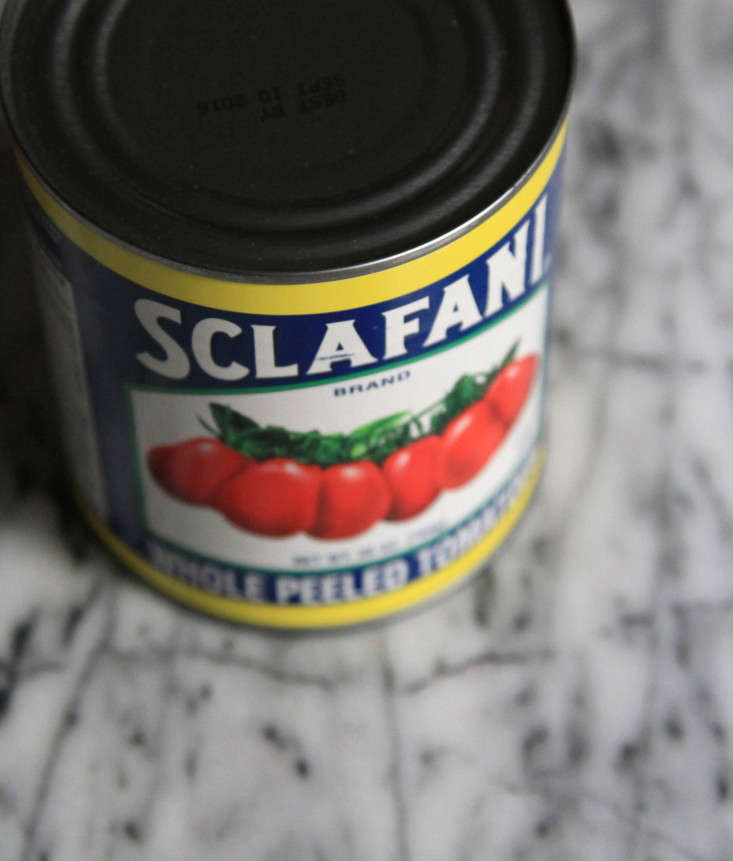 And in the other corner: At the store Sclafani canned tomatoes called out to me because of their colorful packaging and great price at just over $3 a can. Plus, the name Sclafani makes me want to say it with an Italian accent and that I’m-speaking-Italian hand gesture if you know what I mean. (Hm, I’ve been to Italy once and no one did that.) But back to the tomatoes. The thing is, these peeled, canned tomatoes taste just like peeled, canned tomatoes. There is no spirit of trying to pretend to taste like a fresh tomato. Which I respect. These are saltier and more sugary, and they live in a bath of slightly richer broth–that I could’ve used in the sauce. So I did the only thing I could and made an oven-baked pizza. 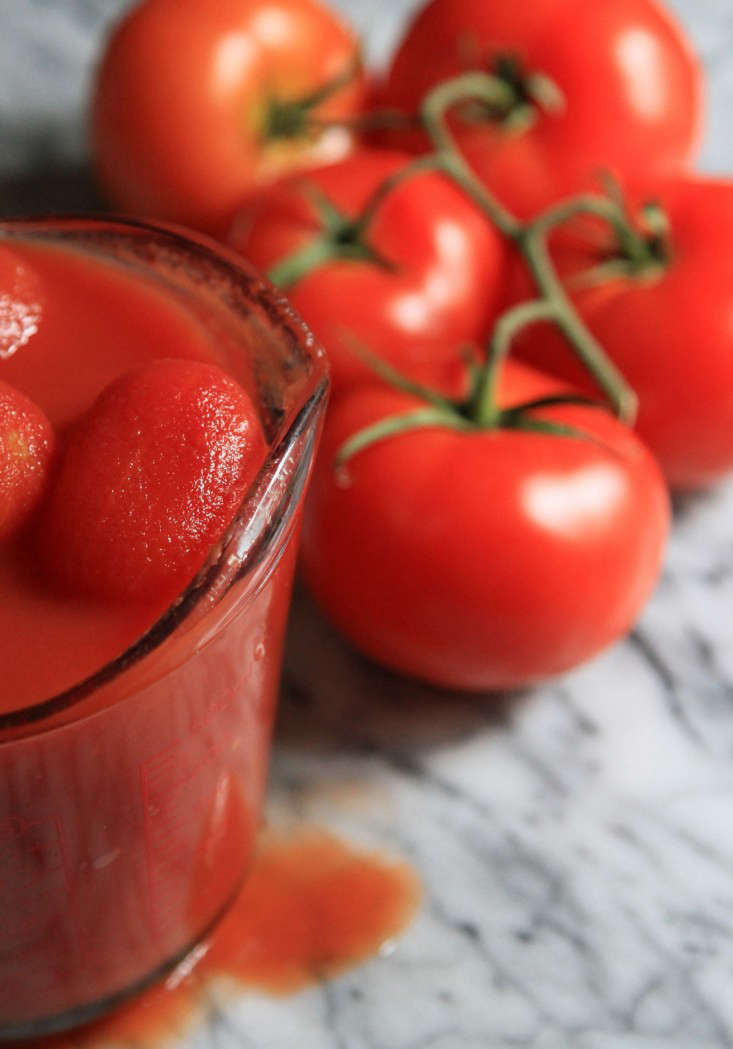 And the winner is?

There is nothing like a farm-fresh summer heirloom tomato. For me to tell you otherwise would be irresponsible. But if I had to try to replicate the taste on a budget, what I found is that there are varieties out there that come, okay, kind of close-ish. Good enough for government work. (As my parents used to say…who worked for the government.) Making a pasta sauce or a pizza is a tomato to-MAH-toe kind of endeavor: the fruits themselves don’t matter nearly as much as the spices you choose and the amount of vino you drink. That said, in a situation where If I decide to serve plainer tomatoes or inherit a $1 million bequest that comes with the stipulation that I use it to pimp out my pantry, I’ll be stocking up on March tomatoes.

My next project, after summer arrives, will be to jar my own tomatoes. I suggest you do same.

What is your winter tomato story? Any great jarred or canned tomatoes I’ve missed? Advice for me as I embark on jarring my own?

Finally, get more ideas on how to successfully plant, grow, and care for tomatoes with our Tomatoes: A Field Guide.

Ask the Expert: Poppy Okotcha on the Wild Edible Garden