Spring seems like a distant daydream. Luckily Michael Leva, a reader who gardens in Connecticut’s Litchfield County, sent us some photos to remind us of what’s ahead (in four months or so: stay strong).

When Leva, a New York-based fashion creative director, bought an 18th century farmhouse on four acres nine years ago, the gardens were in disrepair; he worked with Dave Bergman of DWB Botanical Design in nearby Southbury to fix that. “A house had been built next door where there used to be an apple orchard, which broke my heart,” says Leva. “We closed off an entrance to the old orchard, and built a stone wall. That was the catalyst for the beginning of the garden.”

(N.B.: This is the third in a series about readers’ Secret Gardens. For more, see “Beauty in the Berkshires” and “What a Landscape Architect Plants at Home.”) 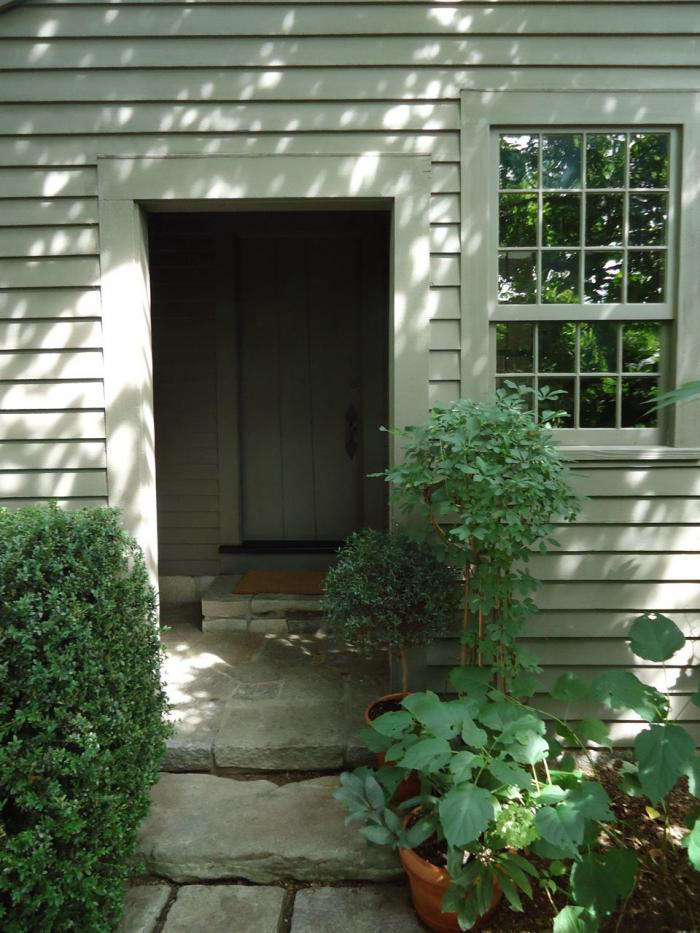 Above: The kitchen door on the side of the house is “the entrance,” says Leva. “There’s no walkway through the lawn to the front door. There is another side door, which was a funeral door–they had ‘showings’ in the 1700s and couldn’t meander in and out of hallways with caskets, so that door goes directly into the parlor. If I have a formal party, I use the funeral door.”

The kitchen door’s granite stoop, which dates to the 1700s, is flanked by boxwood and a myrtle topiary.

The house is painted a custom color Leva describes as “kind of a green-y taupe. They cringed when I walked into the paint store because I kept saying, ‘Add two more drops of black.’ It took me forever to mix it.” 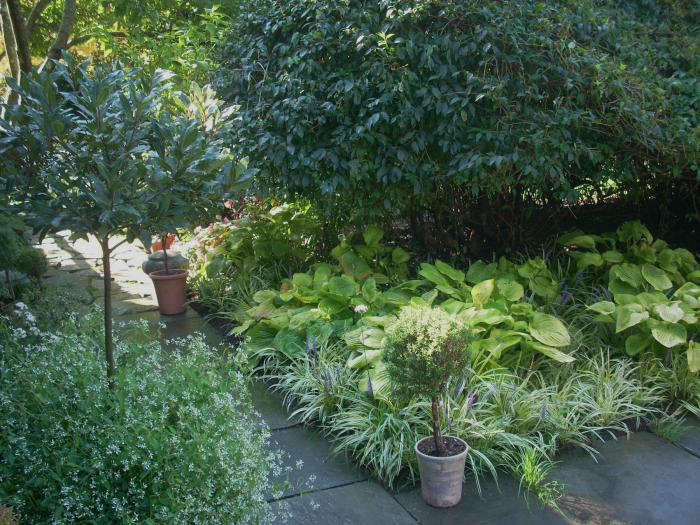 Above: The back patio outside the kitchen. The path is lined with pots, including a bay laurel standard underplanted with euphorbia. 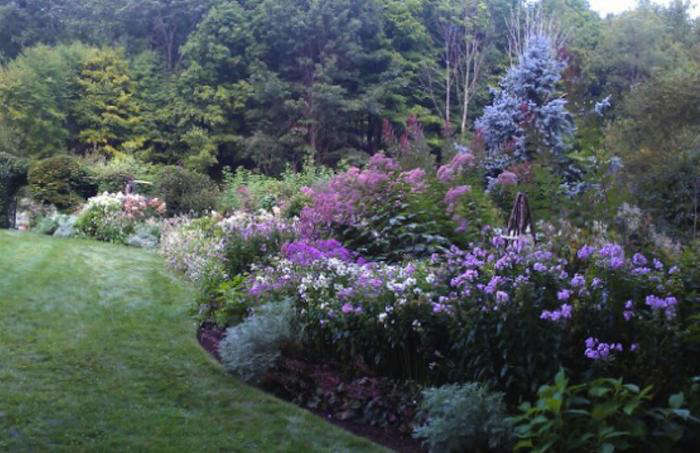 Above: The Long Border. Leva inherited the blue spruce (R) when he bought the property. In the border: Joe Pye weed, phlox, echinacea, artemesia, heuchera, smoke bush and “tons of hydrangeas,” says Leva.

In the spring, Leva trains clematis on tuteurs; in the fall, sedum Autumn Joy blooms.

“It’s a layered garden–I really like the idea of planting something tall right in the front and then have things sprout up and out in a way that looks like wavy water,” says Leva. “It takes a fair amount of maintenance to keep that from looking like a mess.” 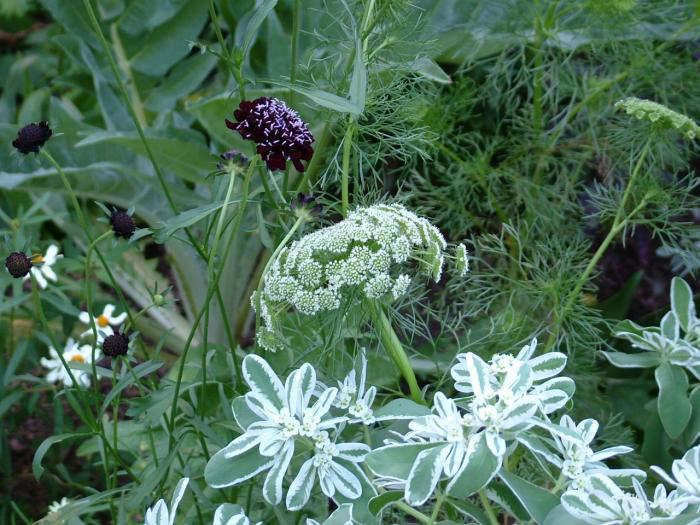 Above: An intimate view of the Long Border: black cosmos, Queen Anne’s Lace (or ammi flower), euphorbia, and white coreopsis. The big leaf in the background belongs to a cardoon; its silvery foliage makes a dramatic foil.

Would you like us to feature your garden in an upcoming post? If so, send us some photos. For more information, see “In Search of Secret Gardens, Reader Edition.” 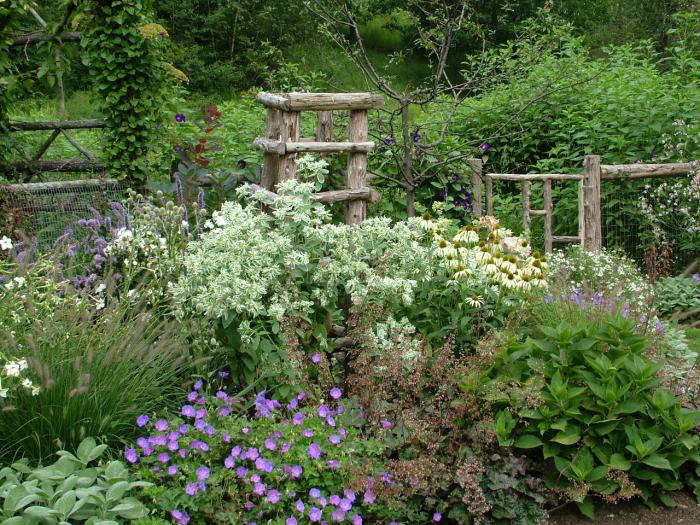 Above: Through the rustic gate is a mown path that cuts across a wildflower field of Queen Anne’s Lace and yarrow and goldenrod and wild sunflowers. 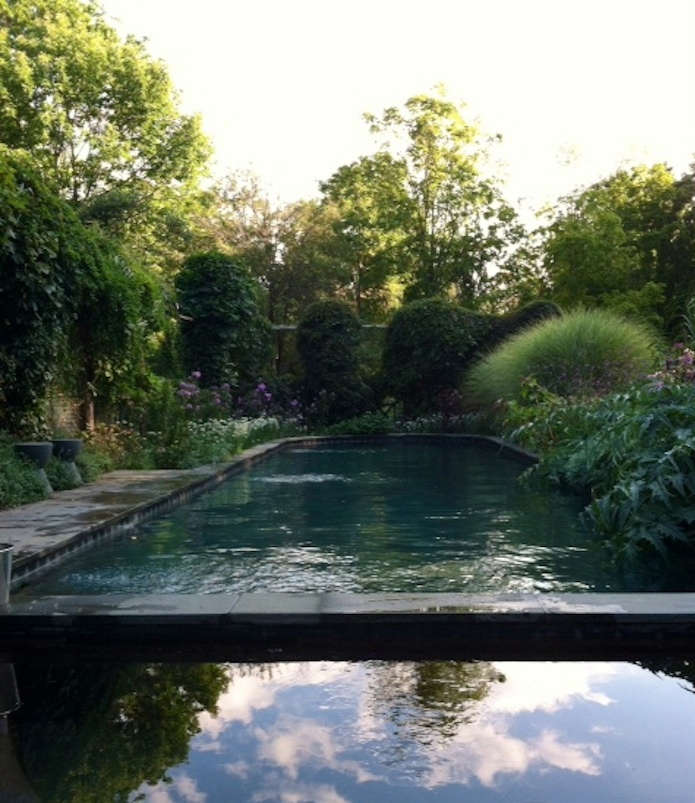 Above: When Leva bought the property, the cedar fence surrounding the pool was bare. “It looked like a fort to me; I used to call it Fort Apache,” he said. “I immediately started planing vines all over that structure.”

Now he keeps the vines–a jumble of climbing hydrangeas, kiwi, grapes, and clematis–pruned into curvy shapes. “It’s elaborate now,” he says, “all these mounds of vines trimmed into bubbly shapes.” 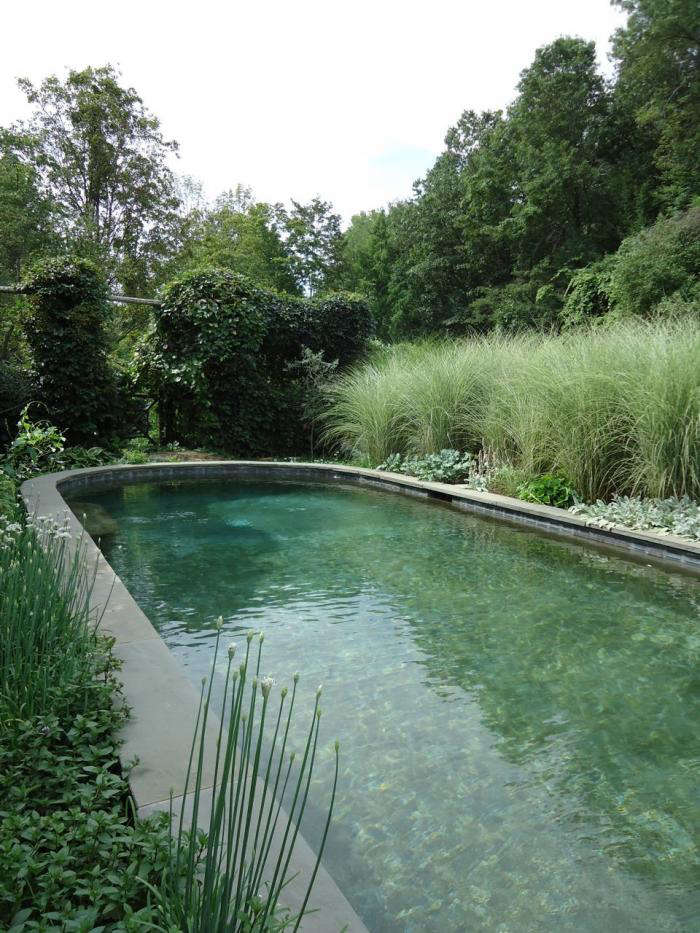 Above: The bottom of the pool is “intensely painted to look like a pond, with about nine different colors of paint,” says Leva. “The first time my father came, he said, ‘you have to get someone out here because there’s algae in the pool,’ and I said, ‘No, that cost extra.’ ”

Lamb’s ear, salvia, Love-lies-bleeding, and and chives are allowed to spill into the pool. “It’s so lovely to in the pool just staring up at the plants and the thousands of honeybees and bumblebees,” says Leva. ” 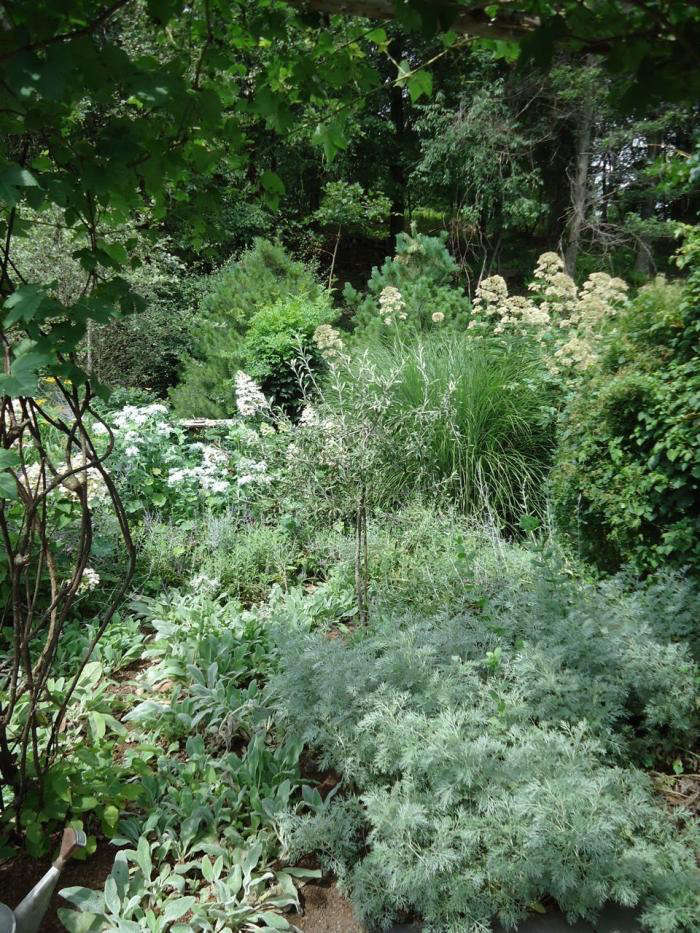 Above: Connecticut is not an easy place to garden, says Leva. “The winters are really brutal and the summers are brutally hot.” Yet his garden has no in ground irrigation and the only things he waters are brand new plantings. He choose plants–such as Lamb’s ear and artemisia–that don’t need a lot of water.

For another of our favorite gardens, see “A Garden With No Obstacles.” 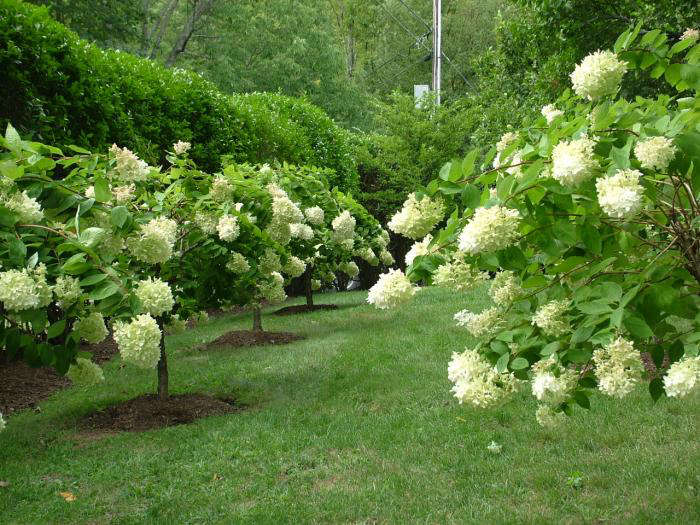 Above: An allee of PeeGee hydrangea standards bordered by a privet hedge. 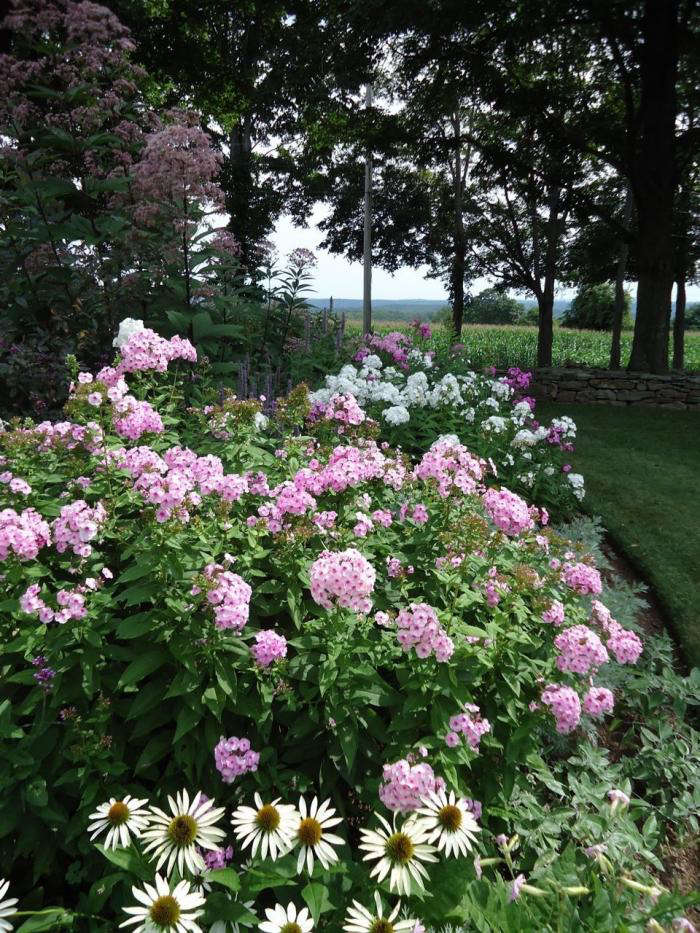 Above: A view of the Litchfield hills–and a real cornfield–at the edge of the property. “All that pink phlox would be too precious, too ‘phoofy’ without the Joe Pye weed to take it down a little,” says Leva.

What does your garden look like in the spring? Send photos to edit(at)remodelista.com and we may feature it in an upcoming “Reader’s Secret Garden” post.

Up on the Roof: A Red Tile Birdhouse